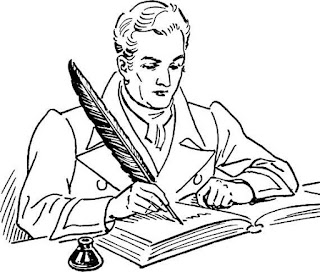 Enter the word 'poet' in the Google search engine and select images. You'll find no end of generic stuff such as this eighteenth century chap with a huge quill and modest ink pot (Quentin Crisp, surely?). Scroll down until you find photographs of real life poets and see how many of them you can name (Shakespeare doesn't count). It's a challenge until you get to Poe.

I'll admit I fritter a lot of my time doing this sort of thing, using search terms such as 'artist', 'writer' and 'critic', the last of which throws up an ignoble cohort of weirdos from The Muppet Show's heckling geriatrics Waldorf and Statler to TV's Mark Kermode.

Many of the images, such as the one above, are examples of 'perfect specifics'. I write about these in my book About a Girl:

The satirical fortnightly magazine Private Eye has a long-running two-page section called 'Literary Review', named after the monthly magazine founded by a former Eye regular Auberon Waugh. Here, following a more-or-less serious review, appear pastiche versions of current books ('What You Didn't Miss') along with gossip from the publishing world (mostly scurrilous), reports of library closures and the delinquent behaviour of authors and agents. This is all attributed to the pseudonymous 'Bookworm', who is likely to be the biographer, novelist and critic D. J. Taylor.

'Snipcock and Tweed', a strip cartoon by Nick Newman, has been running at the foot of the 'Literary Review' page for many years and usually consists of an exchange between the two eponymous publishers. Snipcock is short, portly, bearded, in double-breasted suit and bow tie, while Tweed is more ascetic, wearing half-moon spectacles and a jacket with leather elbow patches, looking rather like the Eye's former editor Richard Ingrams. Occasionally one or the other will be seen outside the confines of their Georgian offices, usually guzzling wine at a book launch or trade fair.

In one strip (13 June 2014) Snipcock is standing in front of a pile of books and a poster announcing the winner of the 2014 Baileys Prize for Women's Fiction. Addressing the trophy-bearing author Snipcock, brimming wine glass in hand, blusters: "How can we possibly have failed to spot that your book was so brilliant?" To which, in the second frame, our author replies: "Elbow. Publishers. Know, Their. Don't From. Arses? Their."

McBride really had arrived. One of the few remaining rites of passage in British public life is an appearance in the Eye - whether in Pseud's Corner (wherein any intellectual pretension is pilloried simply by being reproduced in that context) or Luvvies (a reader-submitted feature listing quotations from precious theatrical types). To be the subject of a cartoon is recognition of a high order.

By the time the Newman cartoon was published the reputation of the book had somehow transcended its readership (actual or hypothetical) to become in some way public property and to 'stand for' something. I'd like to look at what that might be. Newman, an established Eye regular, is particularly adept at exploiting what anthropologists call 'the perfect specific' a term which is very useful in discussing the cultural resonances of the  McBridean style.

When Newman wants to represent, say, an Australian or American tourist he'll show the former in wide-brimmed hat with dangling corks and the latter in a stetson (cigar and camera optional); a football supporter will invariably appear in a striped scarf, sporting a large rosette and carrying a rattle; civil servants always wear pinstripe trousers and bowler hats; Frenchmen in berets wheel bicycles festooned with onions; Scotsmen wear kilts and artists effect smocks and carry easels (unless they are conceptualists such as Tracey Emin, in which case they may carry a suitcase with their name on it, or pose in front of a poster for their current show.) You get the idea - these are comfortingly threadbare stereotypes which still enjoy a certain currency, at least in cartoons. But when was the last time you saw a football fan with a rosette? When did you ever see a Frenchman in a beret? These images are seldom disparaging and never, these days, racist, but allow the cartoonist to make a point, and the reader to get it without too much effort. Perfect specifics are non-verbal cultural signifiers around which a certain consensus has formed. They are quite harmless (unless they represent, say, a bearded man in turban holding a copy of the Koran and therefore. conceivably, depict the Prophet Mohamed, but that's another issue entirely). One might persuade oneself that 'Snipcock' is a travesty (the name carries with it a whiff of anti-Semitism and the character is based on Tom Rosenthal, the flamboyant Jewish publisher), and that Newman's take on McBride is crudely reductionist (big hair, frock, curves, lips) but you'd find it hard to make a case that his work is ever in any way provocative or offensive.

What does all this have to do with McBride's fragmented masterpiece A Girl Is a Half-formed Thing? You'll have to read About a Girl to find out. But back to Google images. Look up 'man' and the first thing you get is this anonymous fellow: 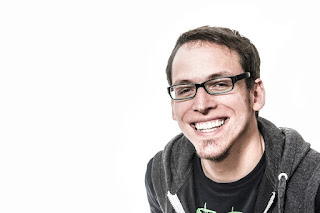 I have no idea what rules if any govern the hierarchy of appearance of images such as this and would love to be enlightened. Is this smiling chap really the visual incarnation of manhood, and more than the bloke at the top of this blog can be said to represent poets What about Woman?  Truth? Beauty? Get weaving . . .