Alice Through the Needle's Eye was published in 1984 by E. P. Dutton. Its author, the late Gilbert Adair, produced two other faultless pastiche sequels to Victorian children's novels - Peter Pan and The Water Babies (neither of which I have yet read). Here's the cover: 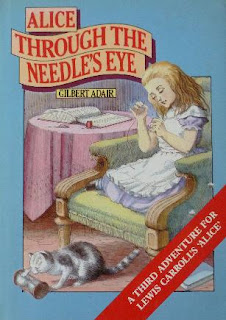 The illustrations (by Jenny Thorne) are delightfully reminiscent of Sir John Tenniel's originals and the text is uncannily faithful to the cadences and rhythms of Carroll's prose. I especially liked the correct Victorian punctuation of, for instance, sha'n't - when did you last see that in print?

I sha'n't give the story away, save to say that the organising principle of Adair's book is every bit as ingenious as the chess game in Through the Looking-glass; that the new characters are every bit as memorable as Carroll's (especially Ping and Pang the Siamese cats joined at the tail, the Welsh Rabbit (forever seeking Worcester Sauce for his toasted cheese) and the Grampus, a pedantically donnish whale (certain to be voiced in any film version by Stephen Fry); that the word play and the puns are every bit as excruciating as Carroll's and that - in common with the two originals - there is as much to divert and amuse the adult reader as the entranced child,

So why is it not better known? And why, come to that, did Disney Studios commission what sounds like a real dud (reviewed in the Guardian here) as a follow-up to Tim Burton's garish and noisy 2010 version of Alice in Wonderland (which took a billion dollars at the box office, dispiritingly). Why can't an enterprising British producer pick up Adair's wonderful story and film a low-budget masterpiece full of wit and flair and eccentric detail?

It has been done before, a lifetime ago. Here's Jonathan Miller's captivating BBC television version from 1966. What a cast! Peter Sellers, Anne-Marie Mallik, John Gielgud, Michael Redgrave, Wilfrid Brambell, Peter Cook and Malcolm Muggeridge. Fiona Fullerton is Alice and the music is by Ravi Shankar. The link will take you to the first part, which starts slowly (as telly used to do, allowing the viewer to settle into a bizarre and unfamiliar world) - but do watch the best.