We went to Great Yarmouth on Saturday afternoon to see The Tempest, directed by William Galinsky - a highlight of this year's Norfolk and Norwich Festival. 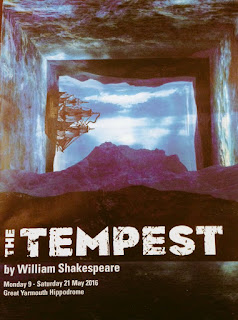 This was my first visit to a town which, in common with all British seaside resorts, is now past its best, although there's evidence of former glories in some of the buildings, not least the two piers, the now-closed Winter Gardens and, still very much in business, the Hippodrome, a spectacular and unlikely survivor.

I'll get on to the production in  a moment, but first more about the amazing venue, engagingly billed as EAST ANGLIA'S MINI ALBERT HALL. Set in a quiet back street near the esplanade dates back to 1903 and is attractively shabby, or perhaps I should say thoughtfully unrestored - a unique, purpose-built permanent circus venue and a real gem. The audience sits in the round on steep bleachers, with superb uninterrupted views of the circular performance area. This space can be flooded within moments by 100,000 gallons of warm water, creating a deep lagoon, with rainfall effects when required. It's all done with hydraulics, I suppose - an unforgettable moment.

For The Tempest this pool was traversed by a catwalk (like a London Underground roundel, flattened), and at one side a diving board structure became by turns an eyrie, the entrance to Prospero's cell and a cascading waterfall. The designer Laura Hopkins produced some marvellous set pieces on what I imagine was a very tight budget (Festival funding was reportedly cut by 90% this year). The pool was surrounded by a slightly inclined wooden circle (shades of The Globe), a flexible and democratic space that preserved a whiff of the circus ring. The performers included a strong man and a very brave aerialist who soared above us as other performers plunged and swam and frolicked and floundered beneath.

I was expecting something more populist - Miranda in a Kiss-me-Quick hat, perhaps, or fish 'n' chips at the feast - and I was agreeably disappointed to see a very modern production that (for  paid little respect to the venue's crowd-pleasing heritage. If not radically experimental (and the text was largely intact) there were some striking uses of amplified and distorted voices, a spirit chorus in black catsuits (reminiscent of Feuillade's Les Vampires), a wonderful floating banquet  and inventive use of the various internal features of the Hippodrome (balconies and boxes and steep aisles).

It was absorbing, original and great fun. My son loved it (his first experience of the play beyond the text). Tony Guilfoyle spoke Propsero's lines beautifully and sprinted impressively around the great circle; Jane Leaney was an athletic Ariel and Pia Laborde Noguez a feisty if at times inaudible Miranda. Only once in the lucid production was I baffled - when Miranda and Ferdinand are (in the original) are traditionally revealed to be playing chess what we got instead was a parade of the spirit chorus bearing elements of a gigantic nursery mobile, assembled centre stage while Ariel, dressed as a bee, buzzed her lines energetically as the lovers gazed on. It only struck me much later that this was a reference to the birds and the bees, and an induction to the world of carnal love and parenthood. This was certainly an idea but not a good idea, in the sense that it was unclear and out of keeping with the rest of the production. Audiences need direction too . . .

After the show we marvelled at a vast collection of old props and posters and theatrical memorabilia crammed into a series of rooms backstage - a fascinating horde of covetable stuff from the Hippodrome's heyday. I took many photographs on my iPad and will post them if I can figure out how.  You can read more about the building's history here.

I chatted for a while afterwards with the Hippodrome's owner Peter Jay. He took over the venue in 1979 and has been running it successfully with his family ever since. Peter struck me as a born entrepreneur, a natural showman and (in the best sense) as much a hoarder as a collector - nothing is thrown out, from a pair of outsize clown shoes to a lionskin costume; plastic floating swans and a selection of vintage microphones and sound equipment; fruit machines, masks, hats, signage and light fittings - at the heart of it all a magnificent antique Ruston diesel generator that used to power the electrical lighting. I loved the place - like the palazzo of a Florentine madman! Peter is no madman, but has an enthusiast's passion for show business

I plan to go back there later in the year to see the Hippodrome's annual summer show, and  to marvel at another of Peter's collections in a building he owns nearby - dedicated to the cinema. I can't imagine what's in store.
Posted by David J Collard at 08:19