A Long Trip to Teatime

A Long Trip to Teatime is one of two books written by Anthony Burgess for children. It's fitfully brilliant, if occasionally laboured; if there's a Finnegans Wake for bright young boys and girls this is it.  It's not as good as, say Nortom Juster's The Phantom Tollbooth or Gilbert Adair's Alice Through the Needle's Eye, but is good nonetheless, and should be better known. Published in 1976 by Dempsey and Squires (never heard of them but they sound like a cracking music hall act), it has wonderful illustrations by Fulvio Testa and appears in a handsome hard cover edition (priced at £2.95, which was quite expensive for a children's book forty years ago).

The hero is a schoolboy named Edgar who disappears down an hole in his desk during a dull lesson about Anglo-Saxon kings, finding himself at first aboard a ship (plenty of piratical exchanges) and then on Easter island, where he encounters a series of bizarre characters, some of them human.

Burgess being Burgess the book is bursting with polyglot virtuosity. There's an explicit lift from Finnegans Wake in the imaginary city of Edenborough, the place to which Edgar's journey leads, and a pervasive Wakean register in some of the livelier lexical excursions, such as this:

There was a load of old rubbish in the corner – bucolics and eclogues and Barclays and
sylviuses and economics and bagehots and darwins and ector and kays and seneschals, all
very dusty. 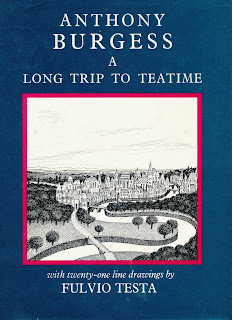 There's an Oulipian aspect to the novel (one embraced by Adair in his fine pastiche/homage), in that Burgess adopts what he calls 'aleatory means' to create the plot. This involves selecting words randomly from a reference book, many of them beginning with 'E' (shades of Georges Perec's La disparition), then  contriving to include them in the plot, a technique Burgess had already employed in his brilliant biography of Shakepeare Nothing Like the Sun (1964) and Napoleon Symphony (1974).

The test of any writing for children is whether children 'get it' and I am happy to report that ten pages in Frank, aged ten, thinks it 's "OK" (which coming from his is practically a rave review).

It is a British writer's duty, he thinks, to get out of Britain if he can and examine the English language against the foil of other tongues, occasionally going back as a tourist and staying at Claridge's.

That swagger sounds like Joyce too. Burgess had been living abroad for the previous eight years, mainly in Italy 'finding the Mediterranean more congenial than the Thames'.

For more on A Long Trip to Teatime, visit the excellent website of the International Anthony Burgess Foundation.

Image/text © the Estate of Anthony Burgess
Posted by David J Collard at 10:20