Published by the George Orwell Society, this is a fascinating collection of (mostly) juvenilia and fragments, assembled by Dione Venables and with a preface by Peter Davison. This is necessarily a very slim volume because Orwell wasn't even a minor poet, as the introduction disarmingly admits. But  this is all the same a valuable volume for all kinds of reasons. 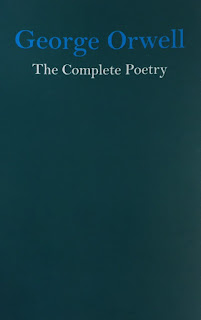 There are schoolboy verses in the approved pro patria manner and Blitz-era poems which have a period appeal. There's much of interest though little of substance. There were plenty of poets around in the 1930s - not only the McSpaundays - who would give him a run for his money; Orwell as a journalist elected to be a visible legislator and, as a journalist, had no equal.  This a bold claim but one I'd support by citing just a tiny part of his prodigious output as a hack - 'The Lion and the Unicorn'. Look it up - it's something George Osborne should be made to read aloud, slowly, while sitting in the stocks and pelted with rotten eggs. (How and where, by the way, does one acquire rotten eggs there days?)

Among the finds in the book is this fragment:

Which set me to thinking up some more rude lines to the tune of 'Oranges and Lemons' . . . but I'll spare you that.

Orwell's biographer D. J. Taylor has a very good piece on the George Orwell Society website, and there's a link there too if you want to buy the book - a snip at eight quid.