This is a kind of compendium of favourite snatches, prompted by the recent publication of Ian Nairn: Words in Place, (edited by Gillian Darley and David McKie, Five Leaves Press) a new collection of essays dedicated to the best architectural writer of the twentieth century - and a a great writer full stop. He also had a brief career in broadcasting and happily some of his documentaries are now appearing on YouTube. Here he is in an extract from the 1970s BBC television series Nairn Across Britain,

He had a mournful voice, every phrase seeming to end in a dying fall. In this clip he knows he's on a hiding to nothing when it comes to preserving the fine Emporium building in Northampton's market square. Town councils in the 1970s were enthusiastically demolishing beautiful Victorian and Edwardian arcades to make way for ugly shopping centres. The councillors are now, one imagines, all dead. Their legacy is with us still. 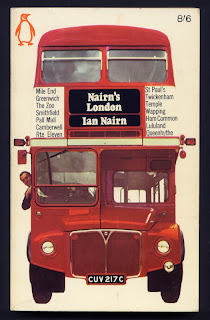 But back to Nairn. His best book - and it's a real masterpiece - is this cheap-looking paperback called Nairn's London, published in 1966 and easily the most brilliant and compelling volume about the capital ever written. I'm on my third copy - the others have disintegrated with use. Many of the buildings he describes are now long gone; the skyline back then was still pretty much as it had been since Wren's day. Even the stylish Routemaster class bus featured on the cover with a smiling Nairn at the wheel has been withdrawn. But it's not so much a guide book as a richly poetic portrait of the city he loved, and one from which I could quote all day. An abiding pleasure is to come across something he wrote about which is still in place (such as the Albert Memorial) and to see it afresh through his eyes. One extract should give an idea of the man and his style:

All Saints, Margaret Street William Butterfield, 1849-59
To describe a church as an orgasm is bound to offend someone; yet this building can only be understood in terms of compelling, overwhelming passion.  Why boggle, when there are a hundred ways of reaching God?  Here is the force of Wuthering Heights translated into dusky red and black bricks, put-down in a mundane Marylebone street to rivet you, pluck you into the courtyard with its harsh welcoming wings and quivering steeple.  Outer and inner doorways show you in, within a few inches of each other; both flowing over with ornament – nothing was too much trouble for the beloved.  Inside, Butterfield had to rely for decoration on other men's intensity of feeling, so it is pointless to look closely at the walls; but the proportions and transfigured gilded violence of this unexpected Heathcliff burn through any artificiality. The violent selfless love carries you up with it, just as the serenity of Bevis Marks lifts another part of you to the same end.
Butterfield never repeated this – how could he? – and his passion set iron-hard, unapproachable, altering his pupils’ drawings in ink so that they had to do them all again.  Perhaps he met too many portly bishops; perhaps there is no way but death to discharge an experience as violent as this.’

My review of Ian Nairn: Words in Place should will in the February 2014 issue of the Literary Review.


Extracts © The Estate of Ian Nairn
Posted by David J Collard at 11:14 No comments:


I can't remember who first said that we should really be sending poets into space to report back - but I expect even a poet would find it hard to avoid crassness. Auden, of course, saw things clearly when hr wrote of the 1969 moon landing:

It’s natural the Boys should whoop it up for
so huge a phallic triumph, an adventure
it would not have occurred to women
to think worth while, made possible only

because we like huddling in gangs and knowing
the exact time: yes, our sex may in fairness
hurrah the deed, although the motives
that primed it were somewhat less than menschlich.


It's not just the Boys now, as Commander Suni Williams confirms. Join her as she takes us on a short tour of the International Space Station, one of many short films on the NASA website which I've been watching with my jaw on the floor and eyes popping. Who knew?

Perhaps it's churlish to complain that this intelligent and courageous woman has adopted a teenager's lexicon - everything she shows us is  described as "cool" or "awesome" or "neat" and her general demeanour is conscientiously unserious (doubtless what NASA publicists wanted). The ISS really is the most amazing thing, and operational since 1998. What are they doing up there? "Cool experiments" is all we're told.

The environment is unsettling - part Stanley Kubrick and part Josef Fritzl. Remember him, the single-minded Austrian family man? There's something of the padded cell also, and I can't say I'd be a useful  member of the ISS crew, being in a state of constant panic and averse to the gymnasium. Yes, they have a gymnasium. There's also a bicycle. See for yourself . . .

You'll know this because, if you're like me, you've already watched Commander Williams's other reports, jaw on the ground, eyes popping.

The Walrus and the Carpenter

Here is Lewis Carroll's 1871 poem The Walrus and the Carpenter, with Sir John Tenniell's matchless illustrations. I wouldn't be the first to point out the deeply sinister implications of this great comic poem. Those poor little, plump little oysters!

It's easy to forget that the poem is recited to Alice by Tweedledum and Tweedledee, so perhaps should be spoken in their shrill schoolboy falsetto. The form (iambic trimeters and tetrameters) is typical of a traditional ballad

The Walrus and the Carpenter


The sun was shining on the sea,
Shining with all his might:
He did his very best to make
The billows smooth and bright--
And this was odd, because it was
The middle of the night.

The moon was shining sulkily,
Because she thought the sun
Had got no business to be there
After the day was done--
"It's very rude of him," she said,
"To come and spoil the fun!"

The sea was wet as wet could be,
The sands were dry as dry.
You could not see a cloud, because
No cloud was in the sky:
No birds were flying overhead--
There were no birds to fly.

The Walrus and the Carpenter
Were walking close at hand;
They wept like anything to see
Such quantities of sand:
"If this were only cleared away,"
They said, "it would be grand!"

"If seven maids with seven mops
Swept it for half a year.
Do you suppose," the Walrus said,
"That they could get it clear?"
"I doubt it," said the Carpenter,
And shed a bitter tear.

"O Oysters, come and walk with us!"
The Walrus did beseech.
"A pleasant walk, a pleasant talk,
Along the briny beach:
We cannot do with more than four,
To give a hand to each."

But four young Oysters hurried up,
All eager for the treat:
Their coats were brushed, their faces washed,
Their shoes were clean and neat--
And this was odd, because, you know,
They hadn't any feet.

Four other Oysters followed them,
And yet another four;
And thick and fast they came at last,
And more, and more, and more--
All hopping through the frothy waves,
And scrambling to the shore.

The Walrus and the Carpenter
Walked on a mile or so,
And then they rested on a rock
Conveniently low:
And all the little Oysters stood
And waited in a row.

"The time has come," the Walrus said,
"To talk of many things:
Of shoes--and ships--and sealing-wax--
Of cabbages--and kings--
And why the sea is boiling hot--
And whether pigs have wings."

"But wait a bit," the Oysters cried,
"Before we have our chat;
For some of us are out of breath,
And all of us are fat!"
"No hurry!" said the Carpenter.
They thanked him much for that.

"A loaf of bread," the Walrus said,
"Is what we chiefly need:
Pepper and vinegar besides
Are very good indeed--
Now if you're ready, Oysters dear,
We can begin to feed."

"But not on us!" the Oysters cried,
Turning a little blue.
"After such kindness, that would be
A dismal thing to do!"
"The night is fine," the Walrus said.
"Do you admire the view?

"It was so kind of you to come!
And you are very nice!"
The Carpenter said nothing but
"Cut us another slice:
I wish you were not quite so deaf--
I've had to ask you twice!"

"It seems a shame," the Walrus said,
"To play them such a trick,
After we've brought them out so far,
And made them trot so quick!"
The Carpenter said nothing but
"The butter's spread too thick!"

"I weep for you," the Walrus said:
"I deeply sympathize."
With sobs and tears he sorted out
Those of the largest size,
Holding his pocket-handkerchief
Before his streaming eyes.

"O Oysters," said the Carpenter,
"You've had a pleasant run!
Shall we be trotting home again?"
But answer came there none--
And this was scarcely odd, because
They'd eaten every one.

I think it was George Orwell who once argued that the poem is a political satire, although what was being satirised I can't recall. In The Annotated Alice, (one of the greatest of all literary commentaries) Martin Gardner says that Carroll told John Tenniel that he could draw either a carpenter, a butterfly or a baronet (was all three scanned perfectly). Tenniel chose the carpenter, thank goodness. I mean 'The Walrus and the Baronet' would be utter nonsense.

By way of a profane bonus, here's a favourite riddle-me-ree:

What's the difference between an epileptic oysterman and a tart with diaorrhea?

You give it up?

It was the American jazz man Eubie Blake who, on the occasion of his 98th birthday, famously said: "If I'd known I was going to live this long, I would have taken better care of myself."

Tracey didn't take good care of himself, so his seventy-year career is an achievement in itself. He went through lean times (and even considered chucking in music to train as a postman), but stuck to it and is now being described by obituarists as "the Godfather of British jazz". For those of you who think British jazz is like French rock 'n' roll (pale imitations of the original) here's a short excerpt from Starless and Bible Black - his celebrated 1965 composition based on Dylan Thomas's 1953 radio play.

The British Prime Minister shares his thoughts on Twitter on the death of Nelson Mandela at the age of 95:

David Cameron ‏@David_Cameron
2h
A great light has gone out in the world. Nelson Mandela was a hero of our time. I've asked for the flag at No10 to be flown at half mast.

Here's my blog from 27th June 2013. It was e. e. cummings who said "A politician is an arse upon which everyone has sat except a man." Mandela was many things - but he wasn't a politician.

Posted by David J Collard at 00:20 No comments: