The Possum in question is 'Old Possum', the nickname bestowed on T. S. Eliot by Ezra Pound. I reviewed Kevin Davey's miraculously original debut novel for the TLS, and here's an extract:

Four words in and I was hooked: “Has to. Wants to”. The quotation comes from T. S. Eliot’s Sweeney Agonistes (Fragments of an Aristophonic melodrama), a short play first performed in 1933 and seldom since. The play is a slice of highbrow guignol in which the eponymous Sweeney flirts menacingly with a “working girl” named Doris:
I knew a man once did a girl inAny man has to, needs to, wants toOnce in a lifetime do a girl in
Davey’s approach, quite brilliantly executed, is to interpret Sweeney Agonistes as a form of confession offering clues to a grisly hypothetical murder committed in London by one Thomas Stern in 1922 (the year The Waste Land was published). Stern (unmistakably Thomas Stearns Eliot himself) is a modernist American poet who kills his troubled wife Fanny during a domestic row. Like Eliot, he is a diffident highbrow with a taste for Chaplin films and music hall, interests shared with the infamously uxoricidal Dr Crippen, a fellow American expat. (Eliot himself twice attended fancy-dress parties as Crippen, on one occasion accompanied by his wife Vivienne as Crippen’s cross-dressing lover Ethel Le Neve.)

You can read the full review here (contains mild spoiler).

Aaaargh! Press (and how do they answer the phone?) is based in Ipswich and run by the former Tribune editor Paul Anderson and the poet Anna Chen, who describe themselves as “socialists of a countercultural, libertarian bent” - what Daily Mail hacks would describe as 'a revolutionary hotbed', and all power to their elbows. They will be publishing Davey's second novel later this year. Radio Joan is described on their website as "an intriguing encounter with 1930s and 1940s British fascism, radio as a propaganda tool and the vagaries of historical memory." I understand il milglior fabbro himself puts in an appearance.

Also by Kevin Davey, and highly recommended: English Imaginaries: Anglo-British Approaches to Modernity (1999). Non-fiction, a punchy series of essays on an eclectic selection of cultural luminaries including J. B. Priestley, Pete Townshend and Vivienne Westwood: 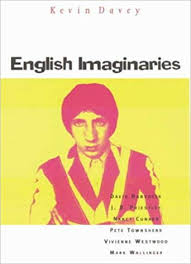 Playing Possum has sold out and isn't available from the publishers, but you can find copies online. Here's a tip - if you use abe.com don't order via the website but get the seller's details and contact them direct. Abe is owned by Amazon, and Amazon is a uniquely wicked corporation.

Finally a reminder that A Leap in the Dark launches on tomorrow at 8pm and I write about that for 3:AM Magazine here. I'm delighted to say that Kevin Davey will be one of the contributors in the near future. Get involved!