A Leap in the Dark

Our fifth Leap in the Dark will feature Canto IV of Jonathan Gibbs’s Spring Journal read by Michael Hughes and an encounter between Anna Kenyon and Dr Ian Patterson, distinguished academic, poet and editor of the ferociously challenging literary quiz Nemo’s Almanac, now in its 130th year. In Part 2 well have a pre-launch party for Simon Okotie’s brilliant new novel After Absalon, the final volume of his acclaimed 'Absalon' trilogy. Plus a competition to win the complete Absalon trilogy, courtesy of our friends at Salt Publishing.

Invitations were sent out this morning and all invitees will receive a Zoom link and password at 5pm today. If you haven't received an invitation and would like to attend please DM me. Box office closes at 5pm.

There's no charge for taking part in A Leap in the Dark, but please make a donation, no matter how large, to The Trussell Trust.

1 The Pale Usher welcomes you all 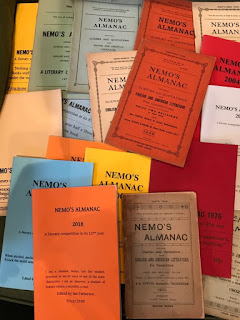 'Close and slow, spring is starting in London . . .'
Interval

4  Simon Okotie on his ‘Absalon’ trilogy in conversation with Nicholas Royle.
Read an early review of After Absalon by Paul Fulchur here 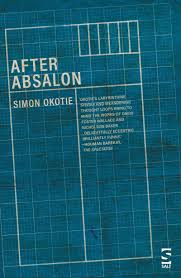 5  Ian Patterson reveals the answers to our bespoke Nemo quiz


8 The Pale Usher signs off

REMINDER: Italian film-maker Chiara Ambrosio joins us on Saturday night to talk about her stunning debut feature film La Frequenza Fantasma (The Ghost Frequency) and you can watch it by clicking here. (Duration 1hr 10m)


Michael Hughes is the author of two acclaimed novels: Countenance Divine (2016) and Country (2018) both published by John Murray, the latter winning the 2018 Hellenic Prize. Under his stage name Michael Colgan he recently appeared in the acclaimed HBO television drama Chernobyl.

Jonathan Gibbs is a writer and critic. His first novel, Randall, was published in 2014 by Galley Beggar, and his second, The Large Door, by Boiler House Press last year. He has written on books for various places including the TLS, Brixton Review of Books and The Guardian. He curates the online short story project A Personal Anthology, in which writers, critics and others are invited to 'dream-edit' an anthology of their favourite short fiction. Spring Journal is a response to the current coronavirus pandemic taking its cue very directly from Louis MacNeice's Autumn Journal.

Anna Kenyon leads a nebulous middle-class existence (she says) as a classical. Music PR, caterer and singer. She is a keen Nemoist.

Simon Okotie is the author of three novels together making up an acclaimed trilogy: Whatever Happened to Harold Absalon? (2012), In the Absence of Absalon (2017) and After Absalon (2020). They are all published by Salt and available here:
https://www.saltpublishing.com/collections/author-okotie-simon

Ian Patterson is a writer and poet, retired academic, translator, former second-hand bookseller, and the editor of Nemo's Almanac. He translated Proust's Finding Time Again (Le temps retrouvé) for Penguin. Guernica and Total War was published by Profile in 2007. His most recent book of poetry is Bound to Be (Equipage, 2017). Marsh Air is forthcoming. His elegy for Jenny Diski, 'The Plenty of Nothing', won the Forward Prize for Best Single Poem, 2017. At the moment he's writing a book about books.

Nicholas Royle is the author of seven novels, two novellas and three volumes of short fiction​. He has edited twenty anthologies of short stories. Reader in Creative Writing at the Manchester Writing School at Manchester Metropolitan University and head judge of the Manchester Fiction Prize, he also runs Nightjar Press, publishing original short stories as signed, limited-edition chapbooks. He works as an editor for Salt Publishing.

The Pale Usher is David Collard, who organises these gigs.

The pale Usher—threadbare in coat, heart, body, and brain; I see him now. He was ever dusting his
old lexicons and grammars, with a queer handkerchief, mockingly embellished with all the gay flags of all the known nations of the world. He loved to dust his old grammars; it somehow mildly reminded him of his mortality.
Moby-Dick by Herman Melville

Our next Leap in the Dark is at the same time tomorrow (Saturday 18th April) and features:

- Translating Beckett with The Pale Usher and Aea Varfis-van Warmelo

- 'Letter from Dinan' by Susanna Crossman