From The Diary of a Nobody by George and Weedon Grossmith:

He suggested we should play “Cutlets,” a game we never heard of.  He sat on a chair, and asked Carrie to sit on his lap, an invitation which dear Carrie rightly declined. 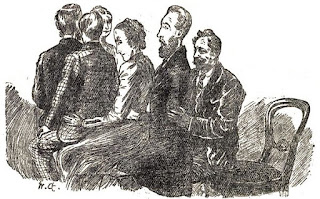 Gowing then said: “Are you a believer in the Great Mogul?”  We had to answer all together: “Yes—oh, yes!” (three times).  Gowing said: “So am I,” and suddenly got up.  The result of this stupid joke was that we all fell on the ground, and poor Carrie banged her head against the corner of the fender.  Mrs. Cummings put some vinegar on; but through this we missed the last train, and had to drive back to Broadstairs, which cost me seven-and-sixpence. 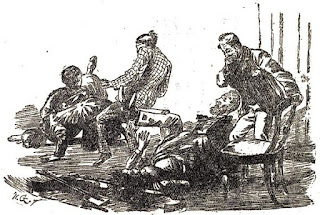 Parlour games! It's the time of year when Charades and Consequences make an appearance at Christmas time in many households, a durable hangover from their Victorian heyday, when there were parlours aplenty in which to play "Cutlets". Few homes today have parlours, and fewer still enough space space for 'Is that you, Montagu?' (two blindfolded players with rolled-up newspapers roll around on the floor - the game features in David Nicholls'  novel One Day).

While parlour games remain popular the parlour itself has gone the way of the pantry and scullery in domestic architecture. From the  Anglo-Norman French parlur (‘place for speaking’) the parlour was, in medieval Christian Europe, the two rooms in a Silent Order monastery where monks, constrained by vow or regulation from speaking, could natter away too their hearts' content with their fellow monks.

We no longer tend to use formal reception rooms although 'front parlour' used to be the term used in the North of England as the room for the (seldom-used) ground floor front room, kept 'smart' for special occasions.

The parlour has a rather downbeat commercial afterlife - think of funeral parlours, beauty parlours, tattoo parlours and, though less frequently, ice cream or pizza parlours. As a domestic feature it has declined, along with the pantry, to the point of near extinction. I'm drawn to objects which retain a husk of their original, utile meaning; 'glove compartment', for instance, harks back to the time when a motorists would sport a pair of leather gauntlets. The term exists but I don't suppose one in a million drivers keeps gloves in that odd little cubby hole.

But enough already. Let's get down to business:

A Merry Christmas to all my readers. You know who you are.
Posted by David J Collard at 10:35