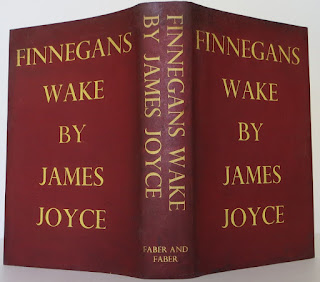 What a lovely object this is. It has a dignified and monumental presence, like a 1930s power station. But - and it's troubled me for years - why is 'BY' thus capitalised? Why in the same size font? Why is it there at all? Wouldn't that nobly austere cover be even more noble, even more austere, without that unnecessary 'BY'?

On the back of their  dust wrappers for volumes of poetry Faber invariably employed that 'by', again for no reason I can fathom. A whim of Eliot's?

Speaking of which, I love the Faber poetry back list (which inexplicably no longer appears on the back of their poetry books. What a cohort - and what a prompt to further reading! With very few exceptions Faber poetry collections - and Faber books generally - no longer have such striking covers as they did in the past. The rot set in when that spindly 'ff' colophon emerged from (was it?) the modish designers Pentagram, and we lost the distinctive and very beautiful  Berthold Wolpe covers  that made mid-century Faber publications so desirable and collectible.

First edition Wakes tend to be in very good nick because they are (predictably) unread. Many modern first editions lack dust wrappers because (as you may not know) they were intended only to keep the book in a reasonably pristine state while on the bookshop shelves and usually discarded at the point of sale by the assistant, who would bin said item. As the dust wrappers of many first edition novels are especially attractive they tend to increase the value of the book, often to an eye-watering amount. Collectors will be wary of less than pristine books with fine wrappers as they are likely to be (as book dealers winningly term it) 'married' - not the original pairing. There's a whole publishing industry based on the production of facsimile wrappers which are, in the case of much genre fiction, the best thing about the novel. Have a look at some  here.