Jacko, Prince and me

Michael Jackson and Prince were both black men and internationally-renowned performers. I am a white man, and a vanishingly obscure literary hack. But we have a lot more more in common than you might think

Michael Jackson was raised as a Jehovah's Witness. He died in 2009.

I don't like pop music, much. Or any music, much. But Michael Jackson and Prince are, or were, my brothers. Or rather I should say my Brothers, because like them I was a Jehovah's Witness. I had no choice in this as my parents joined what is known by its members simply as 'The Organisation' or (tellingly) 'The Truth' when I was 8 years old.

The Jehovah's Witnesses (correctly known as The Watchtower Bible and Tract Society of Pennsylvania, the world's most prolific publishing outfit) are an evangelical fundamentalist religious cult within which everything that is not forbidden is compulsory. It's hard to communicate how very strange the convictions held by its followers are to anyone outside the organisation, so I shan't begin to try. Most Witnesses are not bad people (although there are some very nasty types within the organisation who are occasionally brought to justice, usually for some form of extreme child abuse). But they are dupes.

Michael Jackson and me were raised to believe (although that's a weak word for the kind of zealot conviction we were expected to embrace) that the world would come to an end at some point late in 1975, when we would both be 16. Prince, who signed up later, may never have known this. (The Witnesses regularly give precise dates for the Apocalypse, based on measurements derived from the Great Pyramid, or something, and these pass quietly and without discussion or comment.)

I can't lift an image from the Walt Disney film Peter Pan for copyright reasons, but if you know the movie you may recall the moment when Peter arrives for the first time at the Darling family's house in Bloomsbury, and the uncanny moment when he crouches on the roof and is briefly lit from below, his expression momentarily diabolical.

My theory is that this particular image made such an impact on Michael Jackson that he would spend much of the rest of his life carving his features into a simulacrum of it - the huge eyes and grotesquely retroussé nose, the abundant floppy hair, the weirdly asexual or presexual look that became the Jackson trademark.

Because, I'd further theorise, he wanted to arrest his own development and, in so doing, stall the Witnesses' ghastly eschatological chronology. He wanted, in his simple way, not so much to turn back time but to stop it in its tracks. His paedophiliac tastes (and there can be no question that Jackson was a paedophile) were, it seems to me, an aspect of a more general rejection of maturity, and of the passage of time itself.

Witnesses are not interested in life, only in eternal life. Eternal life in a paradise on earth that will follow Armageddon, a point at which all worldly things will be swept away and only practising Witnesses will survive (or be resurrected). According to their magazine The Watchtower, the earthly paradise will look like this: 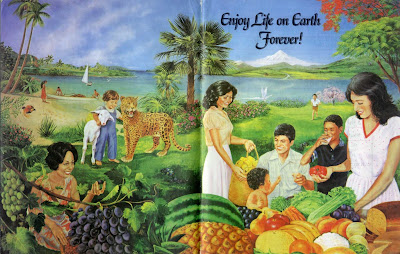 This may look to you like a kebab shop mural, or a North Korean calendar (the aesthetic priorities of any tyranny, religious or secular, can be remarkably similar). There are no buildings and there's no infrastructure, although there's plenty of fresh fruit, and wild animals are friendly and approachable. The lion shall lay down with the lamb (it says so in the Bible). Everyone is neatly dressed. Will there be ironing boards in this early paradise? Washing machines? How does the fruit get distributed? And who built that yacht? Is there a currency? On what system does the economy operate? Will money be magic? Where are the old people?

Here's the thing though - back in the 1970s, when I was growing up (and Michael Jackson was for good reasons of his own deciding not to grow up) the kind of images found in publications from the Watchtower Bible and Tract Society of Pennsylvania were more like this: 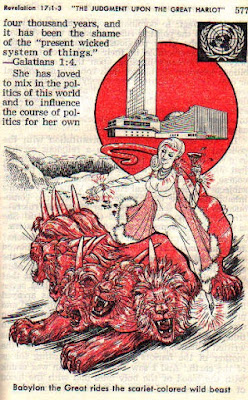 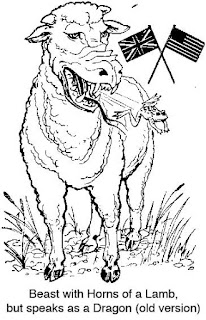 Theologically speaking they were weird. And more than weird - mad. Mad and ridiculous and wrong - an assault against taste, intelligence and reason. And they were not something to be challenged because zealot evangelists do not have anything as fragile as beliefs, they have only convictions. These are not hard won, or open to negotiation. They are self-evident truths, and ungainsayable. Ultimately a longing for eternal life is nothing more than a profound timor mortis - the fear of  oblivion.

It's surprising that Prince - not a dullard - should have been suckered into something so lifeless and wrong.  It's even more surprising that a hip rocker such as David Thomas of the cult avant-garde band Pere Ubu (they meant something in the late 1970s; check out their debut album The Modern Dance) should also have been washed in the blood of the lamb. There are others - other Sisters, other Brothers.

Images © The Watchtower Bible and Tract Society of Pennsylvania
Posted by David J Collard at 10:21