Rainbow Dance and A Colour Box

From 1936 here's Rainbow Dance, a very short advertising film by Len Lye, made for the General Post Office. 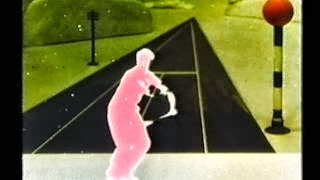 The dancer is Rupert Doone, partner of the theatre director Robert Medley. Together the two men ran the avant-garde Group Theatre which staged, among many other noteworthy plays. Auden's Dance of Death and the Auden / Isherwood collaboration The Ascent of F6. As a fellow Gresham's schoolboy it was Medley who, on a Sunday afternoon walk, had asked Auden whether he wrote poetry at all. As Auden later recalled in Letter to Lord Byron:


I never had, and said so, but I knew
That very moment what I wished to do.


Doone appears as a tennis player and hitchhiker (both quintessential 1930s activities) and Lye does extraordinary things with colour.


Len Lye was a prodigiously gifted artist from New Zealand who went on in later life to make the most extraordinary kinetic sculptures - look on the internet for his amazing Wind Wand and other constructions.

But back to Rainbow Dance. It's lovely, but not as lovely as the pure abstract films Lye made around the same time. One of these used to be screened on a loop in Tate Modern, although not in a suitably darkened room so the brilliant colours were washed out. These films were made without a camera, Lye painstakingly painting each frame by hand using a variety of techniques - twenty four frames per second. It's tempting always to freeze a Lye film and enjoy each frame as a unique (and highly desirable) abstract artwork. You'll see what I mean in A Colour Box (1935) with catchy music by Don Baretto and his Cuban Orchestra.