This blog is only incidentally about my family name. It's actually about the piano manufacturers Collard & Collard, to whom we are distantly related. Few piano makers, I'm pleased to report, have  a more distinguished literary pedigree. 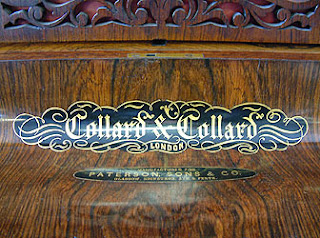 From The Diary of a Nobody by George and Weedon Grossmith, originally appearing in Punch magazine from 1888 and published in book form in 1892:

After my work in the City, I like to be at home.  What’s the good of a home, if you are never in it?  “Home, Sweet Home,” that’s my motto.  I am always in of an evening.  Our old friend Gowing may drop in without ceremony; so may Cummings, who lives opposite.  My dear wife Caroline and I are pleased to see them, if they like to drop in on us.  But Carrie and I can manage to pass our evenings together without friends.  There is always something to be done: a tin-tack here, a Venetian blind to put straight, a fan to nail up, or part of a carpet to nail down—all of which I can do with my pipe in my mouth; while Carrie is not above putting a button on a shirt, mending a pillow-case, or practising the “Sylvia Gavotte” on our new cottage piano (on the three years’ system), manufactured by W. Bilkson (in small letters), from Collard and Collard (in very large letters).

Thus begins what may well be the funniest comic novel in the language (unless you have a grumpy resistance to this kind of thing). Mr. Pooter is an ancestor of Leopold Bloom - lower middle class, of modest means and prone to pomposity. 'The three year's system' was a form of payment by instalment, what in my childhood was known, disparagingly, as 'the never-never'. The Grossmiths skewer the pretension of "W. Bilkson", a fictitious firm, with connotations of "bilking" or fraud, whose inferior quality pianos bear the more reputable manufacturer's brand. Nothing changes.

Speaking of Bloom I'm pleased to note that there's also a Collard and Collard piano in Ulysses. In the Sirens chapter (the one with a musical theme set in the Ormond Hotel that begins "Bronze by gold heard the hoofirons, steelyringing Imperthnthn thnthnthn.") It features the two barmaids Lydia Douce and Mina Kennedy, who strain to see the viceregal cavalcade passing by:

Miss Douce's brave eyes, unregarded, turned from the crossblind, smitten by sunlight. Gone. Pensive (who knows?), smitten (the smiting light), she lowered the dropblind with a sliding cord. She drew down pensive (why did he go so quick when I?) about her bronze, over the bar where bald stood by sister gold, inexquisite contrast, contrast inexquisite nonexquisite, slow cool dim seagreen sliding depth of shadow, eau de Nil.


—Poor old Goodwin was the pianist that night, Father Cowley reminded them. There was a slight difference of opinion between himself and the Collard grand.


—A symposium all his own, Mr Dedalus said. The devil wouldn't stop him. He was a crotchety old fellow in the primary stage of drink.


—God, do you remember? Ben bulky Dollard said, turning from the punished keyboard. And by Japers I had no wedding garment.


'A slight difference of opinion' with a grand piano? And is Joyce adding to the musical theme by the  near homophonic rhyme of Dollard and Collard (& Collard)?

Now, with a faint stink of the lamp, here's the history bit:

F. W. Collard was a director of the company Clementi & Co., a well respected piano manufacturer of the late 18th century.  Collard was apparently a mechanical genius, and awarded several patents for piano design and construction. When Muzio Clementi retired in 1815 the name of the firm was changed to the noble and euphonious 'Collard & Collard', becoming one of the great British piano makers of the 19th century. The 'cottage style' as acquired by the Pooters were small uprights, although the company also made concert grands.

In 1929, the firm was sold to the Chappell Piano Company of London, but pianos bearing the Collard & Collard name were produced until about 1960. They're rather baroque objects for today's tastes - lots of ornate transfers and candelabra and what-not - can be picked up today on eBay for next to nothing. I'm tempted - but there's no space here, not even for a baby grand.

Camden was home in the 19th century to many piano-makers, as easy access to the canal network meant that materials could be brought in and the finished instruments could be shipped out around the country. The Collard & Collard factory and showroom can still be seen - it's the distinctive circular building in Oval Road.