My 300th blog, and by way of celebration here are links to a year's worth of my reviews and commentaries in the Times Literary Supplement. You may think this is a cop-out, and in certain moods I would agree. But this is also a pretext to include my favourite TLS cover (below) featuring Powell and Pressburger's sublime masterpiece A Matter of Life and Death. I'll write about this film some time. 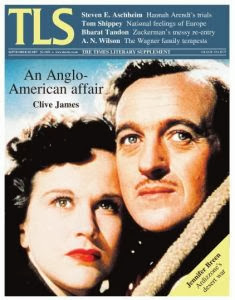 So, in order of publication:

The Projection of Britain - an absorbing history of the wonderful GPO Film Unit.

More Worthy than Lark - how the death of T. S. Eliot was reported by the BBC.

Music Wars by Patrick Bade - a fascinating account of musical culture during the Second World War.

A Point of View by Clive James - a collection of essays and postscripts from his Radio 4 series.

I'm a Believer - a short note in defence of Neil Diamond.

London E1 by Robert Poole - the only novel by this forgotten working-class writer.

In every dream home . . . Maynard L Parker: Modern Photography and the American Dream

Gob impressive A Girl is a Half-formed Thing by Eimear McBride. The first review of a book that has now become famous, by an author hailed by Anne Enright of The Guardian as 'a genius'.

On Writing with Photography edited by Liliane Weissberg  and Karen Beckman.

Class Difference The Likes of Us - Stories of Five Decades - short stories by Stan Barstow.
Twitter and Brimstone Four novels by Gerald Kersh: Night and the City, The Angel and the Cuckoo, Nightshade and Damnations and Fowlers End.

Why Photography Matters by Jerry Thompson - a little gem of a book.


There are others, I'm afraid, and more to come But this will have to do for now. Tomorrow's blog may be a world first . . .