I went recently to the latest production by the Punchdrunk theatre company, an ambitious epic entitled The Drowned Man.

The venue was an abandoned building next to Paddington station - a colossal Edwardian pile empty for the past half century and presumably a warehouse of sorts built for the Great Western Railway. It has been taken over by Punchdrunk and four vast floors cunningly remodelled by stage designers to resemble a run-down 1940s film studio (complete in every detail with dozens of rooms for wigs and  costumes and editing suites and make-up and a producers' boardroom and commissary. That's not all - on one floor was an acreage of scrubland desert; on another street of stores and a movie theatre; in the basement a stagnant lagoon. There were also clusters of run-down slum caravans housing starstruck newcomers and those who never made it. All lit in dim Edward Hopper tones, the entire building dingy and hazily atmospheric. 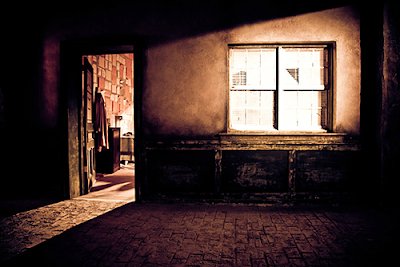 On arrival we had been issued with a sinister beaked mask, given a short introduction by a camp lift attendant (and the warning not to speak during our visit) and then let loose to roam freely around the site for three hours in what's known as an "immersive theatre experience". After two hours I'd seen about half of the installation (including some spectacular dancing and some very surprising and satisfying moments watching actors in close up in remote parts of the building) and was completely exhausted, so found the very congenial bar (complete with torch singer but, alas, unstylish cans of warm Budweiser) and waited for my companion to join me (the point being that one had no choice but to navigate the building alone, like a ghost revisiting the past). 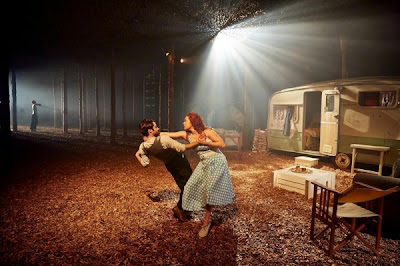 Well it was alright. I'd prefer an evening re-reading Nathanael West because three hours of crepuscular mystery, athletic dancing, ambiguous encounters and overwhelming portentousness soon begins to pall, no matter how awe-inspiring the treatment. The lighting and sound were superb, and the choreography (which involved moving a company of over thirty performers seamlessly around the site from one episode to another) was astonishingly good. But (to use an old cliche) it all amounted to less than the sum of its parts.

It struck me that the reason for this was that the whole conception of A Drowned Man was based around an essentially Protestant sensibility. There were thousands - thousands - of "clues" scattered around the building - photos and letters and typescripts and postcards and memos and love notes and so on, and one was expected to read them (in the dim light) and piece together a (quite banal) narrative  -seemingly lifted from The Day of the Locust.


By Protestant I mean the belief that "the World is God's second book" as John Calvin said, an elaborate code to be broken, an accumulation of symbols the meaning of which we are placed here on earth to decipher. The makers of the show have decided to create an environment absolutely saturated with detail, but detail that adds up to nothing much. Worth seeing though, and even worth going to see, if only to confirm that God is not in the details. And we may be reminded of that distinctly modernist principle - that a work of art should not be about something, but should be that thing itself.