If he were a painter Ernest Notes Brookings would be classified as an outsider artist, and an important one.

He's not part of any group or movement and unknown beyond a circle of devoted admirers. Few poets are so immediately recognisable (usually within a line or two) and so engagingly inimitable. He's in a  class of his own, and magnificently so. Readers unacquainted with his work may write him off as a William McGonagall-type eccentric, an amusing oddball. That would be unfair.

I first became aware of his work in the 1980s as a regular reader of The Duplex Planet, a cultish American magazine founded in 1979 by David Greenberger. The magazine exploits a single, brilliant idea - it consists of transcribed interviews with the elderly residents of nursing homes and so-called 'meal sites' in the Massachusetts area which are illustrated by some of the world's best graphic artists.

This combination of authentic geriatric speech and contemporary images was and remains utterly beguiling. The voices are real, the memories intense and vivid, the tone candid and unrestrained. 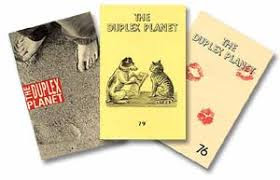 Ernest Notes Brookings - Ernie - was born in Newbury, Massachusetts in 1898. He served in the US Navy, studied engineering at MIT and settled in Springfield, Vermont, where he worked as a designer of machine parts.

In 1979 Greenberger was employed as the activities director in in the Duplex Nursing Home in Boston where he first met Ernie, who was then in his early eighties.

Greenberger noticed that Ernie enjoyed reading poetry and suggested that he should write some of his own. This Ernie began to do, and with tremendous gusto, providing he was given a subject. In the remaining seven years of his life he wrote nearly 400 poems and there was nothing he couldn't tackle with alacrity, from power tools to after-dinner mints, from Vermont in winter to the death penalty. An online index of his published works confirming the astonishing range of his interests can be found on Greenberger's excellent website.

Ernie's very distinctive poems unvaryingly consisting of punchy four-line ABAB stanzas with erratic rhythm and a wondrous sense of discovery and delight and the urge to explain, were a regular highlight of The Duplex Planet (named after the nursing home) until his death in 1987. The bouncily assured verses were accompanied by illustrations which sometimes served to reflect the content, sometimes to subvert it. The result is irresistible - poignant, hilarious, challenging.

Here, for Mothers' Day is a typical piece:

A prize cow pedigree sought
Hide vary colored, has short horns
While feeding calf, muscles are taut
When over, turns her head and yawns

A bird in tree nest
Waits until eggs hatched
Thought: these are the best
Wait until the door is latched

A hen on eggs in nest
Cackles when hatched
God will do the rest
About six in a batch.


I was delighted to discover at a recent book fair that a small indie outfit called Boatwhistle Books, 'a London-based publisher of singular books for singular readers' publish a generous anthology of his work. Here it is:

It's an American classic to set alongside Whitman's Song of Myself. Seriously.

You can order The Golden Rule direct from the Boatwhistle here. Prepare to be dazzled.
Posted by David J Collard at 07:43