Round About Town by Kevin Boniface (Uniformbooks)

The sky is white as clay, with no sun.
Work has to be done.
Postmen like doctors go from house to house.

The haunting final lines of Larkin's great poem 'Aubade' nag at me as I sit at home in this calm city, awaiting the postman's knock.

Kevin Boniface  is an artist who works as a postman in Huddersfield and Round About Town, eight years in the writing, is a collection of observations made on his early morning round. It's been my bedside book of choice for the past year or so.

What makes it unusual - unique, even - is that it's the perfect book to read first thing, on waking up. There's a snug (and smug) pleasure in reading about somebody who has already started their day, sometimes in foul weather, as one remains tucked up and toasty.

His book, with its many close encounters and interactions also recalls a time both recent and remote when we were not all socially isolating and living in fear and dread, which gives it an added value the author could never have anticipated. Boniface's writing connects us with what used to be taken for granted - hundrum normality

He's a one-man Mass Observation Movement. On his walk from the sorting office to the streets nearby Boniface is alert to every detail, both natural - wildlife, types of the daylight, birdsong - and cultural.

6.15am Dancers and bouncers share jokes and cigarettes outside the strip club. The dancers are wearing their 'standing outside' uniform: white faux mink coats, suspenders and heels. The bouncers wear black suits and patent shoes.

The man behind me on the bus to the hospital has a loud hacking cough. I get off where a group of builders with hard hats over their hods are smoking in. huddle outside the house with the empty Cheese Curls packet and the pile of dog shit underneath the trampoline in the yard.

There's a lot of pre-recession Ground Force decking around her and it's slippery and treacherous at this time of year; the old man with butter on his nose advised me to watch myself after I slipped on his.

In the street, a young man with a shaved head and tracksuit is vacuuming his brand new Vauxhall Corsa while he listens to Robbie Williams quite loudly.

The settings are usually urban with rough pastoral moments as we head out of town and onto the surrounding moors. Much of what happens is bleak and downbeat in a particularly English way - we're in an underpopulated literary spectrum occupied by the likes of Cold War Steve, Tim Etchells and Barney Farmer (he of Viz Comic's Drunken Bakers). Nothing escapes Boniface's attention and he records his observations in prose that is clear, precise and deadpan. He is very funny, but I'll leave you to find that out for yourself. The effect is cumulative and immersive.

I dip into it very sparingly most mornings because I never want it to end, and when I get to the last page I know I'll start again. Postal workers are heroic at the best of times, and these are not the best of times. 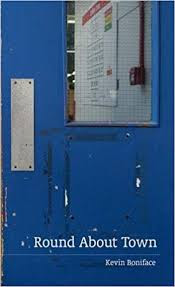 Buy a copy from the publishers here.

Uniformbooks (sic) is based in Axminser, Devon and run by Colin Sackett, who describes his press as an "independent imprint for the visual and literary arts, cultural geography and history, music and bibliographic studies." The website is full of wonders.