On my desk as I type this is a copy of The Complete Saki, the collected short stories of that perverse Edwardian genius H. H. Munro.

Contents aside - macabre social satires with a whiff of the belle époque, the missing link between Wilde and Wodehouse - what snags my admiration is the marvellous blurb on the dust wrapper, provided by the American author and critic Christopher Morley. The best blurb ever, I reckon. Here it is:

"There is no greater compliment to be paid the right kind of friend than to hand him Saki, without comment."

But here's one book that would offer the same kind of compliment to the right kind of friend, a book I've so far passed on three times to date (admittedly with a comment or two). It's Doppelgänger by the late Daša Drndić,  translated from the original Croatian by SD Curtis and Celia Hawkesworth and published by Istros Press. 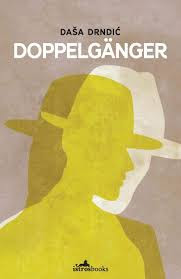 I came across the writer for the first time last year, when Doppelgänger was submitted for the Republic of Consciousness Prize. It knocked me and my fellow judges for six and was unanimously chosen as one of six books making up an exceptionally strong shortlist. The prize was awarded jointly, and rightly, to Will Eaves for Murmur (CB editions) and Alex Pheby for Lucia (Galley Beggar Press), both superb novels. If the conventions governing literary prizes were more flexible I feel Daša Drndić could have been a third winner (has that ever happened?) but she had died in 2018 (see her Guardian obituary here). This, I have to say, counted against her when it came to the final deliberations.

But I urge you to read Doppelgänger and I can't resist breaking Morley's Saki dictum to add the following comment:

The title offers a commentary on the novel's structure - the book is made up of two separate stories, each navigating the space between how we see ourselves and how the world sees us. The first, 'Arthur and Isabella' is a brilliantly uncomfortable and transgressive account of a sexual encounter between Arthur and Isabella, an elderly couple who meet on New Year's Eve in the snow; the second, 'Pupi', about an eccentric and cultivated old man who spends his time watching rhinoceroses in the city zoo and attending gallery openings. The two stories reflect one another awkwardly and together produce something naggingly unforgettable and far more than the sum of its parts. Think of Harold and Maude, remade by Béla Tarr.

If that snags your interest you can buy Doppelgänger direct from the publisher here.
Find out more about the author here.
Posted by David J Collard at 07:14