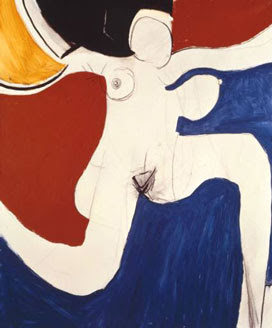 Hilton made a second version that year (below) which is every bit as good. I'm not sure which one I like best. The title of the first is better. The second image is more bouncy, and especially the breast.
Hilton, à propos, pioneered the admirable practice of drawing nudes in motion by encouraging Rose, his wife, to walk around as he sketched her. Good work!