On Jack Cox and Dodge Rose

From April 2016, here's a blog about a first novel by a young Australian author. I mentioned the book in passing during A Leap in the Dark last Friday but, in a senior moment double-whammy, could recall neither the name of the author or the title of the book. My friend Alan Crilley had a copy to hand (and admitted to having read the novel three times), and obligingly uploaded a page for the audience to share - the page in which a piano is destroyed by means of a golf club.

I find myself wonderfing what the author is doing now, apart from approaching the ripe old age of thirty. I'd be very interested to read anything he's written since, and would love to invite him to take part in A Leap in the Dark. Cannot find details of his agent online and his publisher, Dalkey Archive, don't seem to be functioining at the moment. Anyone?

I write about this experimental novel in the current (April) issue of Literary Review. You can read the opening paragraph of my piece here, but for the rest you'll need to take out a subscription.

Here's the cover of Dodge Rose (published by the excellent Archive Press). The white wrapper looks odd against a white background, so you'll have to supply the outline yourself. 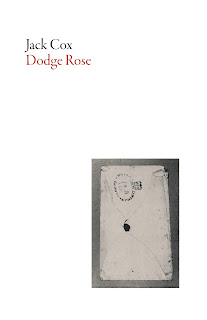 The author is Australian. He was born, raised and educated in Sydney and now lives in Paris. He is 26. I know nothing more about him and his publishers were unforthcoming when I emailed them for details.

Dodge Rose has attracted a lot of attention, not all of it favourable. Houman Barekat, writing on the website Full Stop, describes it as 'so turgid with mannered prolixity as to try the patience of even the most dedicated logophile', a sentence which itself falls foul of the very standards it aims to promote.

I'm all for any cultural artefact that leaves critical opinion divided, or fragmented, because when two people agree about something one of them is unnecessary, so I'll happily take issue with Barekat because I disagree with his judgements on both the book and its author; because both strike me as very much more than merely promising.

Barekat again, later in the piece, delivering the coup de grâce:
Dodge Rose is a high-rent throwback, accomplished in its way – a virtuosic demonstration of command of technique, a testament to faculty time well spent – but derivative and parodic in the time-honored, fanboyish tradition of those works that are condescendingly, and often disingenuously, labeled ‘promising debuts.’

'High-rent throwback' ? I'm not even sure what that means, but it sounds like a Bad Thing. My view is that Dodge Rose has a place in the great re-boot of modernism currently under way, and initiated by Eimear McBride's A Girl Is a Half-formed Thing (written when she was about the same age as Cox). Other writers under forty are revisiting the avant-garde tradition that came to a sudden halt with the publication of Finnegans Wake in 1939, when other more urgent priorities emerged. Experimental fiction is in pretty good shape right now and I think I'm up to speed with the latest developments but  - and here's a confession - I was completely wrong-footed by Dodge Rose and said as much in my Literary Review piece:

The second decade of this century is shaping up to be the most exciting and fertile period for experimental writing since modernism's heyday in the 1920s, and Dodge Rose is an extraordinary and unclassifiable achievement. Whether it adds up to more than the sum of its intriguing parts is anyone's guess. To tell the truth I really have no idea quite what to make of this wholly original work of 'literalture'. Where are our writers leading us?

Where indeed. It's a good time to be a reader. But it's never a good time to be an experimental author, which of course makes it all the more worthwhile. Cox's 'literalture' (a term unlikely to catch on as it's all but unpronounceable) takes great risks, none of which a sceptic would admire, but all of which give me a thrill of recognition, the beneficial shock of the new. To be sure his lengthier passages can be hypnotically dull and opaque and many readers may lose their nerve, admit defeat and grab the nearest James Patterson by way of relief.

I said in my review:

Some passages in Dodge Rose are utterly baffling (pages 106-7 had me on the ropes) but Cox's exhilarating prose will repay attentive re-reading and (in time) will attract no end of critical elucidation and commentary.

I've revisited those pages, am still none the wiser, and stand by what I said. But this is not a question of opacity, rather one of density. Poetry - real poetry - never surrenders its full and only meaning on a first reading, or even after several readings. In all likelihood is doesn't even have a full or only meaning. Some prose can be like that. Having read Eimear McBride's first novel closely half-a-dozen times while preparing to write a book about her book, I was repeatedly stopped in my tracks by something I'd overlooked, or failed fully to appreciate, or which I'd simply forgotten from an earlier reading. Some novels - the best novels - remain in a state of flux, constantly reconfiguring themselves, never fully settling down. They can never be finally and definitively read. Ezra Pound's lovely definition of what makes for a great novel comes to mind: “a certain eternal and irresponsible freshness”.
And since we're name-dropping - I expect it was Henry James (because it usually turns out to be Henry James) who said that with certain writers and with certain books, as with certain valued friends, we do not see the flaws but admire the qualities. Indeed, what others may regard as flaws are precisely the qualities that engage us as admirers. Some of these qualities may be quite troubling, of course, but they remain qualities.

Literature  - real literature - is the opposite of advertising. It doesn't produce an effect by bludgeoning a mass audience repeatedly with a simple message.  It may not even have a 'message'. In the case of Dodge Rose I'm still agreeably nonplussed, still floundering, which is not a bad state to be in. A lot of reading is like eating without digesting, because there's no associated process of internalisation and reflection. What I need from fiction is to find something that changes the way I think and feel, and not only the way I think and feel about about fiction. Dodge Rosecreates new boxes to tick, and ticks them.

For a brilliant extended consideration of this extraordinary novel see here.
Posted by David J Collard at 08:44