Night and the City

The Times Literary Supplement this week carries my review of four reissued novels by Gerald Kersh, a long-neglected author who is undergoing a well-deserved revival. Kersh, born in London in 1911, was a big name in the 1940s and 50s but by the time he died in New York in 1968 he was broke and almost entirely forgotten. He was a fantastically good popular writer and amazingly prolific (over twenty novels, twenty collections of the short stories in which he excelled and thousands of pseudonymous articles for dozens of defunct periodicals). Where to begin? 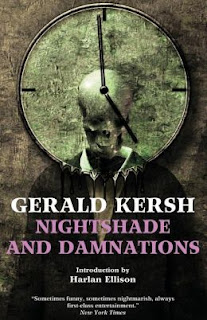 A good place to start (as I say in my review) is a marvellous collection of macabre short stories called Nightshade and Damnations.

One of these is called "Men Without Bones" and has the most brilliant and shocking twist in its final sentence. Four words, and your world is turned upside down. It made me yelp, throw the book to the floor and do a little jig to clear my head. You should read it. Once. Then read the rest - stories that feature ghosts, monsters, clockwork monarchs, apes, Shakespeare, medieval foot soldiers, tattoo'd time travellers, Leonardo da Vinci, mermaids and Martians.

Kersh's biggest success was the hard-boiled pulp novel Night and the City, which remains his best-known work. You can see the trailer for Jules Dassin's brilliant 1950 film version here. Richard Widmark and Gene Tierney, in London together. What a cast!