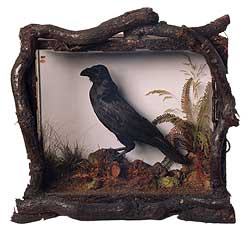 This is a raven named Grip, who once belonged to Charles Dickens. When the bird died in 1841 Dickens had him stuffed and mounted and when the author died he (the raven) was sold at auction to an American collector and is now on display in the Philadelphia Library Rare Books Department. It's unlikely that any other bird contributed more to literature - not even Flaubert's parrot. Dickens mentions Grip by name in Barnaby Rudge, a novel I haven't read and one which has been avoided by film and television producers. I think the problem lies not just with the un-Dickensian subject matter - the anti-papal riots of 1780 - but also with the eponymous hero, who has few engaging traits and is rather marginal to the story. But Grip was also known to Edgar Allan Poe (and no prizes for guessing what poem the bird prompted).

You can read more about him in an excellent article here on a fascinating website dedicated to all things Corvidian: www.avesnoir.com

Speaking of ravens I'm reminded of the Mad Hatter's riddle: "Why is a raven like a writing-desk?"

The Hatter doesn't know the answer, which vexes poor Alice. Lewis Carroll was deluged with letters from young and old demanding an answer until he finally went into print with a number of possible responses, of which my favourite is "Because both begins with 'b'"
Posted by David J Collard at 06:48