It's the 16th June, a date that prompts the question: why has there never been a sequel to the greatest of all modern novels? In a world of online fan fiction, prequels, posthumous pseudonymery - 'Jerry Jobsworth writing as ROBERT LUDLUM - and out-of-copyright genre mash-ups (Pride and Prejudice and Zombies), why on earth has no enterprising publisher ever commissioned a follow-up to Ulysses?

Call it Ulysses 2 (or, in a more Joycean register, Twolysses). It could be set on the following day and begin with a terribly hungover Stephen Daedelus groping his way around the gloomy Martello tower looking for bicarbonate of soda. All Joyce's loose ends could be neatly tied up, and new ones left dangling as the basis for a further sequel (called Ulythree, perhaps). There's a scene on a tramcar, another in a barbershop. There's a seance, and a sermon, and a thunderstorm, and a visit to the theatre. Joyce having exploited Homer's Odyssey as an underpinning structure in his original I suppose we should use the Iliad in the same way, and there could be some artful re-introduction of characters from Dubliners and A Portrait, along with some dream language retrospectively anticipating the style of Finnegans Wake. It practically writes itself - but clearly needs at least one author.

Who, though? It's hard to think of any single modern writer up to the task. So perhaps a team of talented hacks could each be allocated an episode with notes on themes/symbols etc. They could assemble regularly to compare drafts before handing over their final versions to an editor of genius who knocks the whole thing into shape. Perhaps the whole collaboration might finally appear under the name of Joyce James.

Ulysses has, of course, generated many cultural offshoots. There's a film, a radio musical (by Anthony Burgess, no less), vinyl recordings, CD readings, a forthcoming two-handed theatrical adaptation (sounds like one to avoid), fine art (I'm thinking of Richard Hamilton's illustrations), photography, site-specific theatre (the annual Bloomsday carnival in Dublin) and plenty more. I have somewhere a very short graphic novel which reduces the whole epic to a dozen pages, and a 2006 artist's book by Simon Popper, originally part of an installation, in which every word in the novel is rearranged alphabetically, including all punctuation marks, bound in an approximation of the original edition. It's a compelling sort of object and very useful if one wants to check the frequency of any particular word, or whether, say, the surname 'Collard' appears in the novel (which it does). 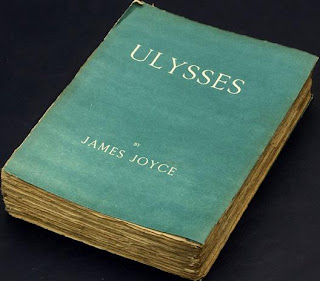 A first edition of the original Shakespeare and Company publication in reasonable condition, like the one above, will cost you around a quarter of a million dollars and in all likelihood be too fragile to handle. A workaday hard cover copy (the best, in my opinion, being the 1960 Bodley Head edition) can be had for just a few pounds.

There are now, with the exhaustion of copyright, many cheap paperback formats in circulation (all with quite horrible covers). What I'd like some bright publisher to do - apart from commissioning a sequel - is to issue a faithful facsimile of that first edition, its wrappers (as specified by Joyce) in the colour of the Greek flag, complete with myriad typographical errors, shorn of any introduction or critical apparatus, a first state first edition before all the later brouhaha over dodgy synoptic editing. That would be worth having - but until then I'll stick to my well-thumbed moss-green Bodley Head copy (below), with its noble Homeric Bow on the spine of the dust jacket, designed by Eric Gill. 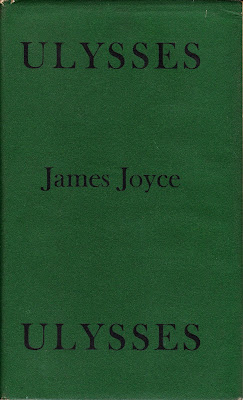 
For anyone interested in the publication history of the world's greatest novel there's a very good illustrated piece here by Stacey Herbert.

Happy Bloomsday to all.