I am happy, but in debt [...] I have no job. My visa is out of order. There may be a war. But I have an epithalamion to write and cannot worry much.

Auden's 1939 diary - formerly the property of his friend George Davies - was auctioned last week and is now owned by the British Library. It was, said the Christie's catalogue, 'the most significant Auden manuscript to have been offered at auction'. Auden didn't keep diaries as a rule, so this is certainly a rarity - 96 pages covering 11 weeks. It coincides with his move to New York and meeting Chester Kallman, with whom he fell in love.

Woke with a headache after a night of bad dreams in which C [Chester Kallman] was  unfaithful. Paper reports German attack on Poland. Now I sit looking out over the river. Such a beautiful evening and in an hour, they say, England will be at war.

A myth continues to surround Auden's departure for the States with Christopher Isherwood in January 1939. War broke out almost nine months later yet even sympathetic commentators continue to claim that the two men 'fled' the country on the eve of the outbreak. Not so - Auden left for reasons both personal and professional and was certainly no coward, having already been on the front line as an ambulance driver and war correspondent in Spain and China.

The matter was nevertheless raised in parliament. On 13 June 1940 the Conservative M. P. Sir Jocelyn Lucas asked the Parliamentary Secretary to the Minister for Labour 'whether British citizens such as Mr W. H. Auden and Mr Christopher Isherwood, who have gone to the United States and expressed their determination not to return to this country, will be summoned back for registration and calling up, in view of the fact that they are seeking refuge abroad?'


In his reply the minister confused Auden with H. W. ('Bunny') Austin, a lawn tennis player who had left for the States in December 1939. (Am I alone in thinking this mix-up may have prompted Patricia Highsmith to come up with the plot for her 1950 novel Strangers on a Train, later fllmed by Hitchcock?). Sir Jocelyn corrected the minister and and asked whether Auden and Isherwood 'ought not to lose their British citizenship if they failed to register as conscientious objectors. There was no official position and there the matter rested. But resentment continued to simmer against able-bodied Britons who were by choice or even circumstance absent from the Home Front. Mud was flung, and some of it has stuck.

I suspect it's Evelyn Waugh who is partly to blame. He created the turncoat poets Parsnip and Pimpernel in his 1942 novel Put Out More Flags, who 'fled at the first squeak of an air raid warning'. Sir Jocelyn, incidentally, bred Sealyham terriers. He developed a breed in the late 1940s (which he described as "death to rats") and it was named after him, the Lucas terrier (below). 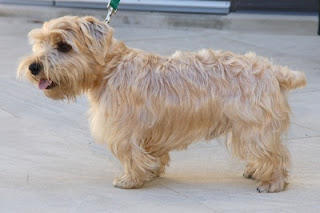