A substantial snatch today, from the opening section  of W. H. Auden's The Orators: An English Study (published in 1932 when the author was 25 years old): 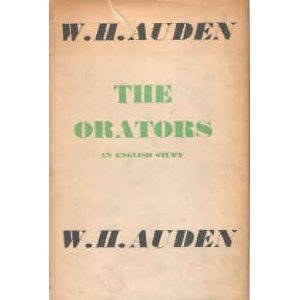 I. ADDRESS FOR A PRIZE-DAY

Imagine to yourselves a picked body of angels, all qualified experts on the human heart, a Divine Commission, arriving suddenly one day at Dover. After some weeks in London, they separate, one passing the petrol pumps along the Great North Road, leaving the dales on his left hand, to take all rainwet Scotland for his special province, one to the furnace-crowded Midlands, another to the plum-rich red-earth valley of the Severn, another to the curious delta-like area round King's Lynn, another to Cornwall where granite resists the sea and our type of thinking ends, and so on. And then when every inch of the ground has been carefully gone over, every house inspected, they return to the Capital again to compare notes, to collaborate in a complete report, which made, they depart as quietly as they came. Beauty of the scenery apart, would you not feel some anxiety as to the contents of that report? Do you consider their statistics as to the average number of lost persons to the acre would be a cause for self-congratulation? Take a look round this hall, for instance. What do you think? What do you think about England, this country of ours where nobody is well?

All of you must have found out what a great help it is, before starting on a job of work, tohave some sort of scheme or plan in your mind beforehand. Some of the senior boys, I expect, will have heard of the great Italian poet Dante, who wrote that very difficult but wonderful poem, The Divine Comedy. In the second book of this poem, which describes Dante's visit to Purgatory, the sinners are divided into three main groups, those who have been guilty in their life of excessive love towards themselves or their neighbours, those guilty of defective love towards God and those guilty of perverted love. Now this afternoon I want, if I may, to take these three divisions of his and apply them to ourselves. In this way, I hope, you will be able to understand better what I am driving at.

To start with, then, the excessive lovers of self. What are they like? These are they who even in childhood played in their corner, shrank when addressed. Lovers of long walks, they sometimes become bird watchers, crouching for hours among sunlit bushes like a fox, but prefer as a rule the big cities, living voluntarily in a top room, the curiosity of their landlady. Habituées of the mirror, famous readers, they fall in love with historical characters, with the unfortunate queen, or the engaging young assistant of a great detective, even with voice, of the announcer, maybe, from some foreign broadcasting station they can never identify; unable to taste pleasure unless through the rare coincidence of naturally diverse events, or the performance of a long and intricate ritual. With odd dark eyes like windows, a lair for engines, they pass suffering more and more from cataract or deafness, leaving behind them diaries full of incomprehensible jottings, complaints less heard than the creaking of a wind pump on a moor. The easiest perhaps for you to recognise. They avoid the study fire, at games they are no earthly use. They are not popular. But isn't it up to you to help? Oughtn't you to warn them then against tampering like that with time, against those strange moments they look forward to so? Next time you see one sneaking from the field to develop photographs, won't you ask if you can come too? Why not go out together next Sunday; say, casually, in a wood: 'I suppose you realise you are fingering the levers that control eternity!'

Then the excessive lovers of their neighbours. Dare-devils of the soul, living dangerously upon their  nerves. A rich man taking the fastest train for the worst quarters of eastern cities; a private schoolmistress in a provincial town, watching the lights go out in another wing, immensely passionate. You will not be surprised to learn that they are both heavy smokers. That one always in hot water with the prefects, that one who will not pass the ball; they are like this.You call them selfish, but no, they care immensely, far too much. They're beginning to go faster. Have you never noticed in them the gradual abdication of central in favour of peripheral control? What if the tiniest stimulus should provoke the full, the shattering response, not just then but all the time. It isn't going to stop unless you stop it. Daring them like that only makes them worse. Try inviting them down in the holidays to a calm house. You can do most for them in the summer. They need love.

Next the defective lovers. Systems run to a standstill, or like those ship-cranes along Clydebank, which have done nothing all this year. Owners of small holdings, they sit by fires they can't make up their minds to light, while dust settles on their unopened correspondence and inertia branches in their veins like a zinc tree. That tomato house blown down by the autumn gales they never rebuilt. Wearers of soiled linen, the cotton wool in their ears unchanged for months. Often they are collectors, but of what? Old tracts, brackets picked up on the road, powders, pieces of wood, uncatalogued, piled anyhow in corners of the room, or hidden under tea-stained saucers. Anaemic, muscularly undeveloped and rather mean. Without servants. Each hour bringing its little barrowful of unacted desires, mounting up day after day, week after week, month after month, year after year has made a slag heap miles high shutting out air and sun. It's getting rather smelly. The effort required for clearance will be immense. Dare they begin. Well, you've got to show them they'd jolly well better dare. Give them regular but easy tasks and see that they do them properly. Hit them in the face if necessary. If they hit back you will know they are saved.

Last and worst, the perverted lovers. So convincing at first, so little apparent cause for anxiety. A slight proneness to influenza, perhaps, a fear of cows, traits easily misunderstood or dismissed. Have a good look at the people you know; at the boy sitting next to you at this moment, at that chum of yours in the Lower School. Think of the holidays, your father, the girl you met at that dance. Is he one? Was she one? Yes, they are charming, but they've lost their nerve. Pray God, boys, you may not have to see them as they will be not so very long from now. 'What have you been up to?' you'd think; 'What did you ask for to be given that?' Faces in suffering so ugly they inspire feelings only of disgust. Their voice toneless, they stoop, their gait wooden like a galvanised doll so that one involuntarily exclaims on meeting, 'You really oughtn't to be out in weather like this.' In some a simple geometrical figure can arouse all the manifestations of extreme alarm. Others haters of life, afraid to die, end in hospitals as incurable cases. These are they who when the saving thought came shot it for a spy. Unable to sleep at nights, they look at watches as the train passes, pushed struggling in towards a protracted deathbed, attended by every circumstance of horror, the hard death of those who never have and never could be loved.


©  The Estate of W. H. Auden. The Orators is published by Faber and Faber