I thought I might do a short series of blogs featuring my favourite snatches of prose, so here's the first. It's from Nicholas Nickleby, and is the letter written to Ralph Nickleby by Fanny Squeers on behalf of her wicked father Wackford (proprietor of Dotheboys Hall, the prison-like boarding school in Yorkshire) following the escape of Ralph's 'nevew' Nicholas (briefly employed there) and his friend Smike, 'a boy of desperate caracter'.

Since reading this at the age of fourteen I'm afraid cannot see any object made of 'tortershell' without imagining how it might affect the brain if violently inserted. The best line comes with perfect timing more than half way through - 'I am screaming out loud all the time I write and so is my brother . . .' 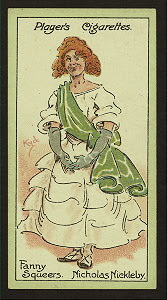 My pa requests me to write to you, the doctors considering it doubtful whether he will ever recuvver the use of his legs which prevents his holding a pen.

We are in a state of mind beyond everything, and my pa is one mask of brooses both blue and green likewise two forms are steepled in his Goar. We were kimpelled to have him carried down into the kitchen where he now lays. You will judge from this that he has been brought very low.

When your nevew that you recommended for a teacher had done this to my pa and jumped upon his body with his feet and also langwedge which I will not pollewt my pen with describing, he assaulted my ma with dreadful violence, dashed her to the earth, and drove her back comb several inches into her head. A very little more and it must have entered her skull. We have a medical certifiket that if it had, the tortershell would have affected the brain.

Me and my brother were then the victims of his feury since which we have suffered very much which leads us to the arrowing belief that we have received some injury in our insides, especially as no marks of violence are visible externally. I am screaming out loud all the time I write and so is my brother which takes off my attention rather and I hope will excuse mistakes.

The monster having sasiated his thirst for blood ran away, taking with him a boy of desperate caracter that he had excited to rebellyon, and a garnet ring belonging to my ma, and not having been apprehended by the constables is supposed to have been took up by some stage-coach. My pa begs that if he comes to you the ring may be returned, and that you will let the thief and assassin go, as if we prosecuted him he would only be transported, and if he is let go he is sure to be hung before long which will save us trouble and be much more satisfactory. Hoping to hear from you when convenient

Yours and cetrer FANNY SQUEERS.

P.S. I pity his ignorance and despise him.

How about that? It's all good, and "two forms are steepled in his Goar" never fails to raise an admiring smile. Dickens is astonishingly funny when he lets rip, and I like the undertow of genuine loathing he feels for the Squeers clan. He pities their ignorance and despises them.

I've never heard this read aloud - would it be better performed by an actress or an actor? For some reason the voice I hear in my mind's ear is that of the late Les Dawson . . .