Forget the nightingale, the albatross, the windhover and all other birds with claims on a place in poetry. I give you  . . .  the vidua bird! 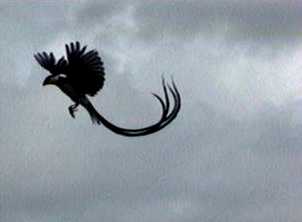 I mentioned this creature in my blog last week and belatedly looked up some images. They're also known as indigobirds and whydahs, and they're terrific. The breeding males have a sepulchral black or indigo plumage and tremendously long tail feathers - like one of Edith Sitwell's hats.

Scuttling off to Wikipedia to learn more I discovered the following (lightly adapted for copyright reasons):
All are brood parasites which lay their eggs in the nests of estrildid finch species. [What would Beckett make of 'brood parasites'?] Unlike cuckoos they do not destroy the host's eggs. Typically, they lay 2–4 eggs alongside those already in the nest. The eggs of both the host and the squatter are white.
Indigobirds and whydahs imitate their host's song, which the males learn in the nest. Although females do not sing, they also learn to recognise the song, and choose males with the same song, thus perpetuating the link between each species of indigobird and firefinch.

Everything about them seems designed to charm.