At the age of eight William Blake saw the prophet Ezekiel under a bush in Peckham Rye, then a rural backwater south of London. A few years later he had a vision of a tree full of angels nearby and, a month after that, a third vision of angels, walking towards him through the rye. These childhood moments informed Blake's development as an engraver, artist and poet.

There are modest local commemorations. Behind the children's playground on Goose Green in East Dulwich (a few yards from the North-West corner of Peckham Rye)  is a mural by the artist Stan Peskett entitled "William Blake's Vision of Angels", commissioned in 1993 by (and for) the Dulwich Festival. It was vandalised in 1997 and, like many London murals, has seen better days. A more recent (and, one hopes, more permanent) commemoration was the planting of an oak tree tree in the approximate location of the place where Blake as a boy saw his second vision.


In Soho a modern block of flats stands on his birthplace, with a commemorative plaque at the entrance, but with no Blakean resonance in style and execution. His plain and rather dilapidated gravestone (shared with his wife Catherine) can be seen in Bunhill Fields. The behemoth Paolozzi statue in the forecourt of the British Library is based on Blake's celebrated image of Newton.

Surely a poet and artist of Blake's international standing deserves more substantial and appropriate commemoration. So here's a modest proposal:

Pictured below is the disused waiting room at Peckham Rye station, on the main line from London Bridge and Victoria.  The station was built for the London, Chatham & Dover Railway in 1865 and designed by Charles Henry Driver (1832–1900), who was also the architect of the magnificent  Abbey Mills and Crossness pumping stations.

The waiting room was closed down and bricked up for more than half a century but has now been partially restored. 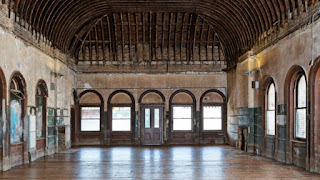 The roof is spectacular 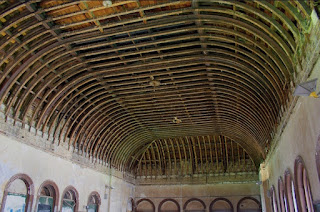 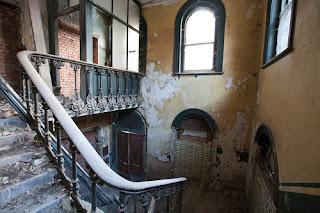 So here's the proposal: why not re-purpose this atmospheric place as an arts venue. Call it - and why not - Albion Hall. A place for poetry, art, music and much more; a creative hub (as we now seem to call such things) not only for the local community but for the capital as a whole.

There will be many challenges to such a scheme, both practical and aesthetic - and these are dark times. But such a project would be a show of confidence in the future and a fitting recognition of one of Britain's greatest creative minds. Any takers?