Philip Maltman and About a Girl

My book About a Girl is published on 17th March (St Patrick's Day, as it happens) by CB editions. Subtitled 'A Reader's Guide to Eimear McBride's A Girl Is a Half-formed Thing', it's a book about a book. You can order your copy here.

The cover features a painting by the artist Philip Maltman entitled (and this is no coincidence) A Girl Is a Half-formed Thing. The image was prompted by his reading of, and his great admiration for, Eimear McBride's debut novel. He must have been one of the early adopters, as marketing types say. He generously presented the author with the original (which must be one of the more unexpected and appealing consequences of her literary fame) and, equally generously, gave my publisher permission to use the image on the cover of About a Girl. I'm really delighted that he agreed to this. 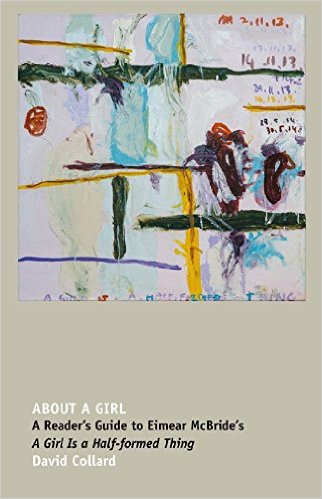 Maltman is, like Eimear McBride, a great admirer of Joyce and has made a series of images prompted by close readings of Ulysses and Finnegans Wake. I relish his wonderfully energetic and cerebral paintings, his fine colour sense (look at the bilious yellows and greens of the dust jacket image); the gauche unlettered lettering, the confidence. He also appears to be very productive, a profligate sense of potential realised.

When you're on his website look out for a short series from 2014 inspired by page 7 of A Girl Is a Half-formed Thing and entitled GIHFT, four  pieces in oil on plywood). They really capture the saturated prose of McBride's brilliant debut - the lake water, the tears, the snot, the blood and other body fluids. They do not make for easy viewing, just as McBridean prose does not make for easy reading. Both have an intense beauty.

Then have a look at an earlier series from 2012: Impregnated with Raindew Moisture, glossed as 'a series of 100 Watercolours inspired by James Joyce’s Ulysses Notebooks'. They are wonderfully torrential. Maltman is also a writer and poet (and that's another blog for another time).

Did I mention that you can but a copy of About a Girl direct from the publisher here ?