About a Girl published

Today - St Patrick's Day - sees the publication of About a Girl: A Reader's Guide to Eimear McBride's A Girl Is a Half-formed Thing.

My book is a book about a book. Eimear McBride's debut novel was immediately hailed as a modern masterpiece when it was published in 2013 and About a Girl explores the background to the creation of the novel, the ten years of rejection that followed its completion and the extraordinary acclaim that followed its publication by the tiny independent Galley Beggar Press. There are interviews with friends and family, contributions from distinguished academics and critics and a long interview with the author herself.

Also included are early drafts of the celebrated opening pages, a bibliography, some thoughts on the stage production and reflections of the cultural impact of a new way of writing. 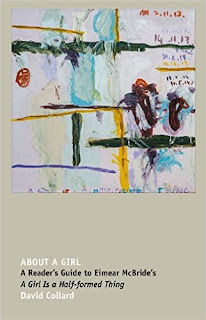 
For you. You’ll soon. You’ll give her name. In the stitches of her skin she’ll wear your say.
Mummy me? Yes you.  Bounce the bed, I’d say. I’d say that’s what you did. Then lay you
down. They cut around. Wait and hour and day.

Forty-five short words, all but three of them ('stitches', 'Mummy' and 'around') monosyllables. The vocabulary could hardly be simpler, but simple isn't the same thing as easy. While all these words can be correctly read and spelled out by an average eight-year-old child, they appear here in combinations that actually unsettle or intimidate unwary readers, some of whom even get angry, can you believe?

Here's a representative disgruntled reader - let's call her Rebecca - on the Goodreads website:

so so so awful. i hated almost every minute. pretty sure all the awards are a result of the emperor's new clothes syndrome, as if you rewrote it in English you'd find neither the plot nor the characters interesting. as it is though it's written in pathetic fragments which, painful enough the first time, you are forced to reread far too often as (surprise surprise) the meaning is often lost when you dispense with grammar and half the words you need to say something. felt like marking a never ending self indulgent melodramatic and boring essay by an illiterate teenager with delusions of grandeur. thank god it's over and thank god (view spoiler) in the end. what a waste of money. stay far far far away.

Why is that? Why should such simple words arranged in a slightly unconventional way, in a way that avoids 'proper grammatical sentences', actually anger some readers, and make them want to express their anger online? Why, come to that, does Rebecca avoid using capital letters when criticising an author who uses them correctly? I don't want to mock Rebecca, who is fully entitled to her opinion (although that doesn't mean that we're entitled to it), but she can stand for all those readers who, presented with something new and original and unusual, react  with fear and derision and inexplicable rage, a contemporary variant of Aristophanes' 'Don't make your house in my mind' which might be expressed as 'Don't hog my Kindle', because most of the negative online comments are clearly based on the free sample pages available on an e-reader. It's remarkable, incidentally, how many bilious reviewers invoke Hans Christian Anderson's fable of the Emperor's New Clothes,assuming the role of the wise and outspoken child who sees through the  pretentious hypocrisy of the rest of us.

Rebecca is right  in saying that if the novel were re-written 'in English' (that is, the type of English acceptable to her) the plot and characters would be of little interest. The author would be the first to agree - and we'll come back to this issue more than once. I don't expect I'd ever be able to persuade Rebecca that Eimear McBride's use of language is a dazzling quality and not a disabling flaw. She's made her choice - but there may be others who are open-minded enough to be curious, to want to know more about the book's genesis and the way the author achieves certain effects. About a Girl is for them.

The first-time reader isn't expected to know, straight away, on the first page, that these oddly-arranged but very simple words represent the thoughts, or unuttered speech, of an unborn child, still a foetus in the womb. Of course, this is not something you expect on the first page one any novel. Novels begin, traditionally, like this:

Hale knew, before he had been in Brighton three hours, that they meant to murder him.

That's Graham Greene's button-holing opener to Brighton Rock. Who wouldn't read on? Or how about this?

A man called Berg, who changed his name to Greb, came to a seaside town intending to kill his father . . .

On the face of it a similar first line, but something a bit trickier is going on, as the self-conscious and artificial reversal of Berg to Greb suggests. This is actually the opening sentence of Berg, a novel published in 1964 written by Ann Quin (1936 - 1973) and published in 1964. Quin, a superb and undervalued author of experimental fiction, wrote three more novels (Three (1966), Passages (1969) and Tripticks (1972) before walking into the sea off near her home town, Brighton. The first time I spoke to Eimear McBride I asked her whether she'd heard of Ann Quin. She hadn't, but then hardly anybody has. Yet Quin is among the vanishingly small cohort of experimental women writers , and one of the most original and compelling. She is not to be valued simply because she's rare, of course, but because she's a thrilling and original writer.

The opening lines of A Girl is a Half-formed Thing are nothing like the opening lines of Brighton Rock or Berg. Graham Greene is an A-writer, and we read on to find out who it is who wants to murder Hale, and why, and whether they succeed. The plot and characters allow the author to smuggle in lots of other material, much of it to do with Catholic guilt and redemption. Ann Quin's interest as a writer lies not so much in plot and character as in the mechanics of the novel, and different ways of telling stories - her prose isn't particularly radical or challenging but her use of the novel form is new and strange.This makes her an exemplary 'B-writer'.

That certainly doesn't mean second-rate, as in 'B-movie'. It was Anthony Burgess who first proposed that novelists could be  divided into two classes: A-writers and B-writers. The A-writer, he said, is a story-teller - concerned above all with plot and character and psychological motivation. Most novelists fall into this category - Daniel Defoe and Jonathan Swift and Jane Austen and George Eliot and Harper Lee. Think of Robinson Crusoe, Gulliver's Travels, Pride and Prejudice, Middlemarch and To Kill a Mockingbird. Then think of Toni Morrison's Beloved and E. L. James's Fifty Shades of Grey (the categories have nothing to do with quality or longevity). A-writers are part of a long tradition and add to that tradition without much changing it. They are part of the literary mainstream and tend to work within popular forms, or genres - the crime novel, the horror story, romantic fiction, science fiction and so on. Not all A-writers are great writers, or even good ones, but some are.

B-writers, on the other hand, often employ plot and character and so on to a high degree of sophistication and accomplishment, but their real interest lies elsewhere. They are interested in language and form and structure, and the potential of the novel to say new things in a new way. They are explorers, and they are never popular in the way that some A-writers are popular. Burgess saw himself as a B-writer but often managed to be both.

The greatest of all B-writers is James Joyce and his masterpiece is Ulysses, the greatest of all B-novels. Eimear McBride would insist that it's the greatest novel full stop, and to hell with categories. You may never have read Ulysses, or you may have tried and given up. It's not easy. Or rather, it's not simple. But it's certainly worth the effort and if you admire A Girl is a Half-formed Thing you might give Ulysses a go. If you're a reader who admires Ulysses then A Girl Is a Half-formed Thing is likely to knock your socks off.

In the category of B-writer novels we can include Russell Hoban's Riddley Walker, Thomas Pynchon's Gravity's Rainbow and Samuel Beckett's How it Is. These may be novels you don't know, or novels you know but don't like. Or they may be novels you know and love and perhaps I should at this point give up addressing you, my reader, as a hypothetical sceptic. I assume you'v read this far because you admire A Girl Is a Half-formed Thing as much as I do. Perhaps you share my view that it's one of the greatest novels of our time.

Joyce's Finnegans Wake is the most extreme example of B-writing, a book in which language is no longer about anything but is (as Beckett put it in Our Exagmination Round His Factification for Incamination of Work in Progress ) 'the thing itself'. Beckett's line seems to me to sum up the challenge of modernist writing and can be extended to include  all forms of modernism: films and books and theatre and art - everything. It's a line I tend to quote whenever I'm confronted with modern art I don't understand, which is often.

B-writers tend to be highly original, experimental, 'difficult' and do not, as a rule, attract large popular audiences. Not all B-writers are great writers, or even good ones, but many are. Anyone aware of the Burgess categories who comes across A Girl Is a Half-formed Thing for the first time will immediately assume that the author is a B-writer. Her use of language is startlingly unique and her heavily punctuated 'ungrammatical' prose may alarm some readers. But, as readers have been quick to discover, the eye and mind soon adjust to the rhythmic syncopations of the words on the page and something quite extraordinary happens, something uncanny, practically alchemical. I can only put it like this: the book begins to read us. What happens to the anonymous Girl is never described to the reader but directly experienced by the reader. This is unsettling and often very distressing. It's also startlingly original - nobody has ever written like this. Caitlin Moran, one of the 2014 Bailey's Prize judges mixed her metaphors but spoke for many when she said: 'Ten pages in and all the bells start ringing. It explodes into your chest.'

So we need a third category and might for the time being call Eimear McBride a C-writer, one who combines the linguistic virtuosity and experimental daring of her predecessor modernists with a page-turning appeal to a general reader who would not usually be willing to tackle challenging avant-garde fictions. She brought a fresh and powerful emotional force to an intellectual form and the critical and commercial success of an uncompromisingly harsh and volatile novel took the world by surprise.
Posted by David J Collard at 06:14