The English alphabet has 26 letters representing 44 sounds (or phonemes). Of course, one could argue that there are actually 52 letters (lower and upper case) but let's not quibble. This shortfall of letters is the reason why English spelling is irregular and 'difficult' and this is what  makes it a target for reformists such as George Bernard Shaw, who argued that since (theoretically) 'fish' can be spelled 'ghoti' by analogy - think 'enough' / 'women' / 'nation'-  there was a strong case for simplifying the system using his Shavian alphabet.

Shaw had a point - his aims were noble, his approach humane. English learners have a greater distance to travel than, say, Spanish learners, because Spanish is phonetically very regular - you say what you see, and spell what you hear, and there are fewer pitfalls. But Shaw's ideas were developed and fatally misapplied by educational theorists in the 1960s.

In September 1961 pupils at twenty primary schools in the Midlands were unwitting subjects in a social experiment.  They were introduced to a new way of learning to read and write, with texts such as this: 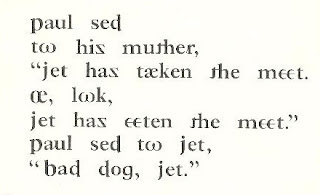 This is the Initial Teaching Alphabet (I.T.A.), developed by the businessman and Tory M.P. Sir James Pitman (1901-1985), the grandson of Sir Isaac Pitman, of shorthand fame) as a simplified writing system to teach English-speaking children to read more easily. The idea was that once children had learned to read using Pitman's I.T.A. system they would confidently progress to learning standard English spelling. The experiment was extended to 75 UK schools in 1962, rising to 200 the following year. By 1966, 140 of the UK’s 158 Education Authorities taught I.T.A. in one or more of their schools.

There were 43 symbols (the number later rose to 45). They can be seen on the chart below: 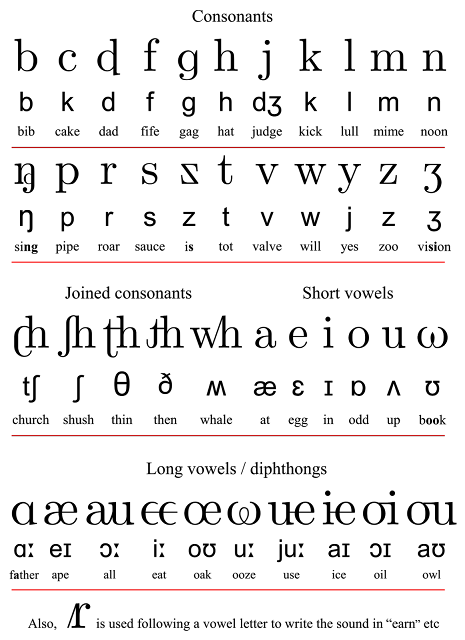 This comes from an excellent online analysis of the subject::

Children who quickly mastered I.T.A. could not immediately read the words they saw about them every day, so that their growing enthusiasm for reading was frustrated. Although teachers were encouraged to allow a mixture of I.T.A. and T.O. in children’s spelling, the children were effectively learning two systems at once: one at school, one in the outside world. And, since children made the transition to T.O. at different ages, teachers would find themselves teaching both systems within the same classroom. Parents were encouraged to take part in the scheme, but many found themselves excluded from their children’s written communication, while children who had begun to read before starting school, or who moved house and changed schools, had to begin again.


(First published in Eye no. 55 vol. 14 2005 - Eye is "the world’s most beautiful and collectable graphic design journal" and (quite reasonably) the authors praise the beauty of the I.T.A. typography, and its idealistic aims.)
Only a zealot could fail to see that the drawbacks of this approach to literacy outweigh any theoretical advantages. The simple fact that parents could not read the texts to (or with) their children immediately eradicated one of the key ingredients in developing literacy outside school. That children were estranged from their surrounding literate environment was also, let's say, an issue. An impoverished range of I.T.A. texts was available making it the typographical equivalent of Esperanto. Imagine having to learn this as a toddler (and imagine having to teach it). The method was quietly phased out in the late 1960s and seems to be almost forgotten today.

From Wikipedia's studiously neutral entry on the subject:

Though the I.T.A. was not originally intended to dictate one particular approach to teaching reading, it was often identified with phonics methods, and after the 1960s, the pendulum of educational theory swung away from phonics.

Don't get me started on phonics - another example of the misapplication of misunderstood ideas. There's a world of English dinginess in the phrase "not originally intended to dictate one particular approach".

Overall, the Pitman initial teaching alphabet (ita) points the way to the needed overall reform of English spelling, such as the Dutch accomplished in regard the writing of their own tongue some two decades ago. [sic]