Next Year Will Be Better


Next Year Will Be Better: A Memoir of England in the 1950s (Five Leaves Publications, £9.99) follows the author John Lucas, now Emeritus Professor at the Universities of Loughborough and Nottingham, then a schoolboy, from the purlieus of Kent to the bright lights of Soho. 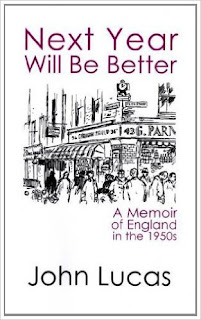 Starting with a vivid account of a hard-up family Christmas in 1949 this 'boomoir' (the term coined by John Sutherland for the growing list of baby boomer memoirs) is a wonderfully-detailed evocation of the ensuing decade and a beneficial corrective to the Eeyoreish musings of Philip Larkin.

Sexual intercourse, we learn, did not begin in 1963 and things weren't as grey as they are often painted. Lucas discourses on the pleasures of food, sex, jazz, poetry, politics, friendship, conversation, and the discovery of literature at a time when the spirit of F. R. Leavis informed English departments in universities which were still high-minded engines of social mobility.

It is a pleasure to revisit familiar territory: 'Flook' by 'Trog', the highly-esteemed Goon Show, Arthur English (King of the Spivs), The Festival of Britain, Coronation Day, Hall's Distemper Men, D.A. haircuts (from District Attorney, apparently, but usually known as a Duck's Arse), desert boots and duffel coats, gaberdine trousers, cycling lamplighters, the Suez Crisis, the Wolfenden Report and, looming over everything, the Atomic Bomb. Lucas has a keen eye and ear for evocative detail, but avoids easy nostalgia in an account of a bright young man negotiating social hurdles and learning how to be an interesting grown-up.

Six months short of his 18th birthday, he travelled for the first time from Ashford's sober suburbs to Soho and had his first self-conscious drink in the French House, experiencing 'an uprush of pure elation'. The faces along the bar were shabby, louche and engaging and the callow young man was entranced. Coffee followed at Bunjy's, books were browsed and purchased and a routine was established. Reading a John Heath-Stubbs poem on the train back to Ashford was a pivotal moment at the end of 'a day of revelations.' The young Lucas developed into a diligent and discriminating reader with excellent taste in books and music. This was a good time to be a reader, before the distractions of television and the internet. He always writes entertainingly, whether about labouring on building sites or attending gigs on Eel Pie Island, 'an untroubled utopia'.

After an academic false start (a half-hearted Walden-inspired attempt to study Forestry in Leeds) Lucas got a place at Reading University, gained a starred first class degree, had 'a feverish encounter' with the eighty-year-old E. M. Forster and an unsolicited snog with Alan Ginsberg. The memoir concludes with a party-goer offering Lucas a freshly-rolled joint in the kitchen. It's the 1960s already, that high, dishevelled decade, and the volume closes with the reader keen to know what happens next in Macmillan-era Britain.

After reading this book, baby boomers (those of us born between 1946 and 1964, which makes me a tail-ender) will have an agreeable sense of déjà lu, and their parents, if still with us, will have a clearer idea of what their offspring were getting up to. Younger readers will enjoy a field guide to a country reinventing itself after a devastating war and the loss of Empire, a country that is vanishing fast. Buy a copy from the publishers here.