Surely all Londoners will remember the late Stanley Green, the human billboard?


I once fell into step behind him while he murmured to himself in an ecclesiastical register the glum litany "Wooomen are yew pyoor? Brides are yew pyoooor?" "Pyoor", I finally realised, meant "pure". He had a thing, it's clear, about virginity. Whatever the time of year, whatever the weather, he wore an odd terylene cap (see above) and a sort of plastic overall, protection against his critics' spittle.

His 14-page pamphlet, Eight Passion Proteins with Care reportedly sold 87,000 copies over  the years. I have one here before me as I write (see below) with the matchless disclaimer:

This booklet would benefit more, if it were read occasionally.

That comma is worthy of Dr Johnson. It's a wonderful piece of home-printed folk art - handset type with random capitalisations and a driving sense of urgent unreason. You never see printing like this any more. 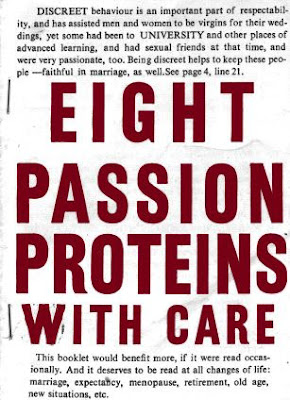 His gratifyingly lengthy Wikipedia entry tells us that the pamphlet went through 52 editions between 1973 and 1993, the price raised very slowly over the years, from 10p in 1980 to 12p 13 years later.

He wrote one unpublished novel - Behind the Veil: More than Just a Tale - which he described as a 'colourful account of the danger of passion and the possibility of redemption' which I'd rather read than anything by Margaret Atwood. Two other manuscripts remain unpublished, a 67-page text called Passion and Protein and a 392-page version of Eight Passion Proteins, rejected (inexplicably) by Oxford University Press in 1971.

The placard, as well as sample pamphlets, are now on display in the Museum of London. And here it is, although differing in some ways from the one in the photograph above. I expect the changes reflect an evolution in his hypotheses: 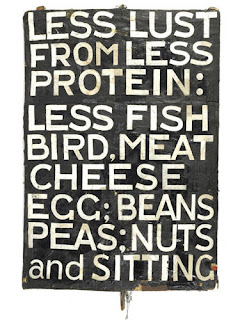 Stanley Green. I like to think he found fulfilment in his lifelong crusade.


Images © The Museum of London
Posted by David J Collard at 11:45