In the 16th century John Calvin, affronted by the number of fragments of the True Cross in circulation, wrote: "There is no abbey so poor as not to have a specimen. In some places there are large fragments, as at the Holy Chapel in Paris, at Poitiers, and at Rome, where a good-sized crucifix is said to have been made of it. In brief, if all the pieces that could be found were collected together, they would make a big ship-load. Yet the Gospel testifies that a single man was able to carry it."

He had a point. Like Charlie Chaplin's cane, or Charles Foster Kane's Rosebud toboggan, which can be seen in almost every film museum on the planet, pieces of the True Cross can be found scattered throughout Christendom. You probably have one within a day's drive of where you are. But it's not only sacred splinters that have become objects of worship.

Christian teaching states that Christ was assumed into heaven corporeally, and therefore the only parts of His body left behind and (theoretically) available for veneration are those parts He had lost (or perhaps 'shed' is the better word) before the crucifixion, namely hair, blood, fingernails, milk teeth, prepuce and the umbilical cord remaining from his birth. (I'm uncertain, by the way, whether all these things should be respectfully capitalised. Is it only the pronoun? Butcher's Copy Editing, to hand as I write, is unhelpful for once.)

There were as many as eighteen different holy foreskins in various European towns during the Middle Ages, including the Holy Foreskin of Rome and others in the Cathedral of Le Puy-en-Velay, Santiago de Compostela, Antwerp, Coulombs in the diocese of Chartres, France as well as Chartres itself and churches in Besançon, Metz, Hildesheim, Charroux, Conques, Langres, Fécamp, and two in Auvergne. (Some Wikipedian wag has added Stoke-on-Trent. And why not?)

Other claimed relics include two examples of the Holy Coat, the seamless garment worn by Christ and for which the Roman soldiers cast lots. There's one in Trier, Germany (pictured below) and another in the parish church of Argenteuil, France, reputedly brought there by Charlemagne. 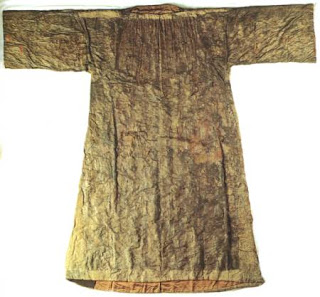 The Iron Crown of Lombardy (below) and the Bridle of Constantine are both said to be made from nails used during the crucifixion. Here's the Crown:

I couldn't find an image of the Bridle.

In Spain there's the Sudarium of Oviedo, a bloodstained cloth, measuring 84 x 53 cm, kept in the Cámara Santa of the Cathedral of San Salvador in Oviedo, said to have been wrapped around Christ's head at the time of the Crucifixion. Here it is: 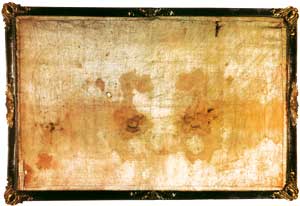 Has anybody ever thought of reuniting the Sudarium of Oviedo with the Holy Shroud of Turin? Sounds like a case for Indiana Jones. And while we're on the subject - has anyone looked into the possibility of using one of the eighteen holy foreskins for cloning purposes?