I lived for three years in one of the now-demolished Hulme crescents in Manchester. There were four of them, colossal jerry-built follies designed by Hugh Wilson and Lewis Womersley and named after 18th century architects, John Nash, Charles Barry, Robert Adam and William Kent. They were built to house 13,000 Mancunians but by the time I moved in few families remained and it was a student ghetto. I lived in Robert Adam Crescent in a large second floor flat I shared with three other undergraduates - Sam, Dahyu and Dom. The place was crumbling.

A 'Hulme look' developed when the whole male population of Hulme seemed to be wearing the clothes of dead men and everyone looked as if they had stepped out of the 1930s with baggy suits and shirtless ties.

I can vouch for the dead men's clobber, although 'shirtless ties' may have been after my time. When Warren Beatty came to the area to shoot Reds in 1981 hundreds of student extras were recruited for the crowd scenes and didn't need much in the way of make up, haircuts or costume.

That the flats were infested with cockroaches and hazy with asbestos dust was beside the point. That the balconies were sure-fire death traps for small children, and that the underfloor heating didn't work was also beside the point. They were rent-free, that was the point, and within walking distance of the university, the then-grimy and untenanted city centre, the now legendary Factory Club (known to us as the PSV) and the wonderful Aaben cinema (see below). The barman in our local, the Grant's Arms, later became a world-famous pop star. There were very few cars around, all the pubs were rough, there was just one horrible supermarket, and a godsend chippie. There was also, one hot summer, a rooftop sniper. His (or perhaps her) troubling presence is seldom mentioned in accounts of the estate.

Was I happy there? Not at all. But I was young, which involved a different kind of unhappiness, and the prevailing register was one of self-conscious miserabilism. Young and intense, in a dead man's suit and long overcoat, always damp and musty smelling. The coat and its owner, that is. I was glumly in love, hard up (though never broke), drinking in sour smoke-filled pubs and unaware that the grotty estate would thirty years on become a celebrated dystopian bohemia, or bohemian dystopia. But that is what it is, at least for writers like Hatherley, born in 1981. It's a sign of our dire times that a writer of his generation (which means for me the next generation) can see in the vanished Hulme estate a land of lost content.


But I should mention what really was special about the Crescents (for me at least) - the Aaben cinema, a few yards away from our rotting and cockroach-infested and stone-cold, rent-free student shit-hole. There were four screens, and you paid once to get in and could stay in the warm until closing time for programmes of - well everything. I sometimes saw a dozen films a week. The walls between the studios were so thin that any given film was accompanied by at least one other audible soundtrack from next door. It was a flea-pit that smelled like a waterlogged fairground but warmer and cosier than our flat, and I gorged myself on Whale, Welles and Wiene, Fassbender and Fellini, and Godard, and Truffaut. Tarkovsky! Kurosawa! And my first encounter with Renoir one cold Spring afternoon: Le Crime de Monsieur Lange. The programming had no rhyme or reason - mixing blockbusters (Raiders of the Lost Ark) with Polish masterpieces (Closely Observed Trains), so (as Henri Langlois did at the Cinematheque in Paris) we solitary groovers created our own montage in the dark. You could smoke in the auditorium, and the movies were projected above our heads through a blue-grey haze only slightly less toxic than the asbestos mist in the kitchen at home. I still have my old membership card: 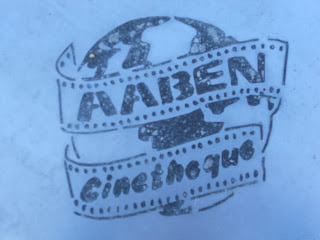