For years I favoured the Mennen Speedstick - the green ones (see below). I was introduced to this excellent male grooming product by a pal who had spent a few years in the States and associated the aroma with the good times he had there. Here's one: 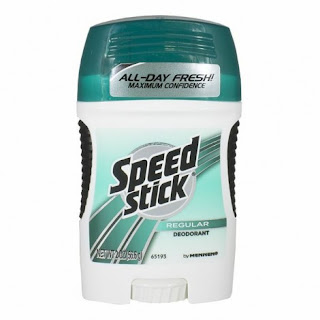 Mennen products are hard to find in Britain (perhaps I'm looking in the wrong place) but can be picked up in France in any branch of Monoprix. I stock up on trips (or ask a well-disposed friend to do so) but ran out a few weeks ago. So the other day I went to a large store in North London to find what's on offer for chaps today. Not much, was the grim conclusion.  There were a few familiar brands - Nivea, Old Spice, Brut even, which took me back - but fewer than in the past. Lynx seems to be the aroma du jour and aimed at younger types  L'Oreal also (this came a s bit of a shock) and a few others.

Most of the smells I sampled were variants on mango chutney, or scented candles, or car air fresheners and corn plasters and - oddly enough - sweat. They all implied gymnasium locker rooms and the male sodality to be found therein. Showers, manly banter, flicked towels and all that. Not at all my kind of thing.

Then I found something with the promising name Mitchum. 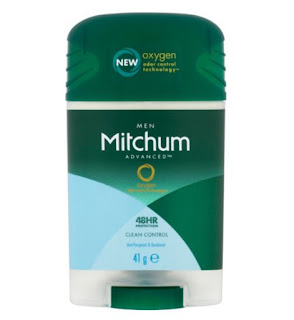 The labelling (apart from the brand) is in a font too tiny for the human eye to decipher - and I mean a human eye with an electron microscope. Who knows what's in there?

Before exposing my firm manly bod to the stuff I naturally looked up the ingredients on the company's UK website, where they could not be found. But they provide some reassurances. My deodorant of choice offers:

Why the last two features appear in lower case is of no concern. I like the thought of a roll-on deodorant that gives you confidence for 48 hours. So I went back to the store and bought one, for £3.99.

What is in there though? I looked it up. It seems that in the past the active ingredient was Aluminum Zirconium Tetrachlorohydrex Gly (20%), but this has since been replaced by Aluminum Sesquichlorohydrate (25%). Why is that? Further research is needed - but they both sound a tad Quatermass to me. The smell is fine - a bit like Mennen Speedstick to my untutored conk. Greatly artificial.


Mitchum was launched in 1970 by Revlon and was widely known (at least in the US) for its marketing slogan, "So effective you can skip a day". The slogan was dropped in 2007, and I'm not surprised. The French have a saying that loosely translates as 'today's sweat fine; yesterday's non!'

The Mitchum brand was purchased by the Revlon Corporation in the late 1960s from what was originally known as the Paris Toilet Company (why on earth drop that brand name?) and later the Golden Peacock Company (ditto - and I'd like to have been at the PTC board meeting which voted on the change). The earlier companies carried an extensive line of cosmetics and it was a chap called Bill McNutt who is credited with inventing the antiperspirant.

Before the company was sold to Revlon it had been based in Paris, Tennessee (ah - penny drops). What I haven't been able to establish is any connection between the product and the very great actor Robert Mitchum. What man wouldn't want to smell like him? What man wouldn't, at least for a time, want to be him? Him, and Cary Grant, but for very different reasons. Mitchum was a natural, Grant an elaborate self-invention. They were both, for my money, the greatest screen actors Hollywood ever produced, and I struggle to think of a third. Not Brando. Jimmy Stewart probably, but that's more on account of the films he starred in - he was always the right actor, if not a great one. Try swapping Grant and Stewart around in the films they made with Hitchcock. See?
But back to personal hygiene. It seems to me that manufacturers are missing out on a huge potential market of men (and women to, I expect) who don't want to smell of deodorants or even expensive colognes blended expertly by Penhaligons. What we want (by which I really mean what I want) is to smell of things other than myself or a high street deodorant.

So what aromas would be welcome in a range of male deodorants fit for the modern male (by which, again, I mean myself)?

I'd suggest the following:


What we need is a revolution in male deodorants comparable to that moment in (I think) the 1960s when plain crisps gave way to cheese 'n' onion, salt 'n'vinegar - and après ça le déluge. We have, I assume, the technology to fabricate any aroma, however niche, just as we can now synthesise any and every taste.