On the Hogarth Roundabout

The Hogarth Roundabout Flyover in West London will never be embedded in the landscape, never be softened by time and use and affectionate regard. It's likely to remain a permanent 'temporary solution' until the heat death of the universe, or at least until a local architect called Richard Gooden gets his way and the smoggy cacophony becomes an underpass beneath a serene water meadow.

In his scheme this stretch of the A4 would be buried, a new green space shielding local houses from the hubbub and we shall all be invited to enjoy (the heart sinks) a 'terraced landform'.  He proposes a new public space to be called the Hogarth Eyot, linking the riverside to the north side of the A4. This is Ian Nairn's derided Municipal Rustic with knobs on.

The flyover itself, which appears to have been bolted together overnight by a squadron of drunken sappers, employs something called the Bridgway system, the sole product of a company run by the then Minister of Transport, Ernest 'Ernie' Marples, a former miner and opportunist chancer who saw no conflict between the public good and his own single-minded accumulation of great wealth. Think Meccano on a Brobdingnagian scale.

Shortly after becoming a junior government minister in November 1951, Marples resigned as Managing Director of Marples Ridgway but continued to hold most of the firm's shares. When appointed Minister of Transport in October 1959 he undertook to sell his shareholding in the company as he was now in clear breach of the House of Commons' rules on conflicts of interest, but for no doubt honourable reasons he failed to do so. When the press reported that his firm had won the tender to build the Hammersnith Flyover (the Ministry of Transport's engineers having endorsed the London County Council's rejection of a much lower tender) Marples was caught on the hop and sold his shares to his wife, allowing him to buy them back at the original price after leaving office.

In 1959 Marples opened the M1 motorway with some wild-eyed observations to the gathered press that could have been scripted by Peter Cook for Beyond the Fringe: 'On this magnificent road the speed which can easily be reached is so great that senses may be numbed and judgement warped. The margin of error gets smaller as speed gets faster. New motoring techniques must be learnt. So here are my two suggested mottos: First: take it easy, motorist! And second: if in doubt, don't!.'

Such thoughtful caution was entirely out of character for Marples, whose political career and social standing came to a sudden end in a collision of tax fraud, Rachmanism, sleaze and tarts. He fled to Monaco on the night ferry in 1975 and eked out the rest of his life in a Rhône château with a vineyard and happy memories of a selfless public service and personal enrichment. His legacy is substantial, if largely ignoble: he introduced parking meters and the MOT test, single yellow lines, double yellow lines and traffic wardens; he dissolved the British Transport Commission (which oversaw railways, canals and freight transport) and paved the way for a Tory crony called Dr. Beeching to wreak havoc on the nationalised railway system.

The Chiswick Flyover (a few minutes to the west of the Hogarth Roundabout) has a special appeal, and  not only as the concrete resting-place of East End villains who fell out with the Kray Twins. It was opened by the lavishly-breasted Hollywood starlet Jayne Mansfield, who was in England to film Too Hot to Handle at MGM's Boreham Wood studios. She arrived in a limo to a chorus of workmen's wolf whistles, cut the official red ribbon with a pair of gold-plated scissors and patted the contractor's bulldog on the head. 'Sweet!' she was reported as saying.

Letters to the Brentford and Chiswick Times complained about the choice of the American star. The organisers replied that they had approached both Donald Campbell and Stirling Moss, who were unavailable. One can only marvel at the line of reasoning that led to extending an invitation to la Mansfield, or the incentives that persuaded her to accept. The organisers, stung by the criticism, retorted:

'We felt […] that 30 months work and the completion of Britain’s first flyover deserved a little celebration”,  […] We could see no reason why any politician or fuddy-duddy should be invited. We feel that Miss Mansfield did a first-class job in a very charming manner.'


Mansfield died aged 34 in 1967 when her Buick Electra 225 ploughed into the back of a tractor-trailer. This led to a change in American law requiring all such trailers to be fitted with a metal underside guard, known to this day as a Mansfield bar (see below). 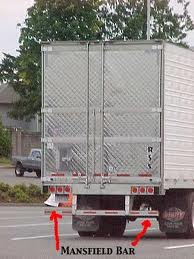 But back, again, to the Hogarth Roundabout. You can circle the site in a quarter of an hour or so, savouring the yeasty belch of the nearby Fuller's brewery. You'll at some point come to a low gate on your left, set between iron railings leading to a public courtyard, at the river end of which an elegant three-story Georgian house stares blankly at the fuming havoc of west London's traffic. On a wall to the left is a small plaque marking the site where Vanity Fair's heroine Becky Sharpe flings her improving book - a copy of Dr Johnson's Dictionary - out of her carriage window and into the garden as she leaves. The constant doppler roar and the toxic emissions aside, this is a serene Georgian enclave (below), set improbably amid the continuous racket of eastbound traffic humping over the flyover, and westbound traffic grinding and growling underneath. It's a place like no other, but you'll need earplugs. Nearby is Hogarth's house, his 'Little Country Box', a museum since 1909. In the garden a 300-year-old mulberry tree from which Jane, his wife, made mulberry tarts for  local children.

Something very similar to the Hogarth Roundabout Flyover can be found in Essex: the Army and Navy Roundabout, built in1978 on the A138 - 'one of the most famous roundabouts in Chelmsford' as one website winningly describes it. This combines two features that may at first sight seem incompatible, being both single lane and bidirectional, traffic heading citywards until 2:30pm and in the opposite direction after that, until the thing closes down nightly at 9pm. Head-on collisions are commonplace. What would Ernie Marples say?