Young readers today have Harry Potter and Hogwarts. We had Jennings and Linbury Court.

Written by Anthony Buckeridge (1912-2004), this was a series of twenty-five books about the goings-on at a minor prep school and the escapades of the eponymous hero and his bespectacled chum Darbishire. I was about ten when I read my first (Jennings' Little Hut) and it was by far the funniest book I had ever read, and so were the others. Buckeridge is a very funny writer indeed - the schoolboy's P. G. Wodehouse. Schoolboy humour is regularly derided as being - well what, exactly? Puerile? I should hope so. It was only the discovery of the anarchic, sarcastic and iconoclastic schoolboy Nigel Molesworth in four brilliant brilliant books by Geoffrey Willans and Ronald Searle that displaced Jennings in my capricious affections. Jennings was a bit of a rascal but Molesworth was every beak's worst nightmare. Molesworth formed me.

Jennings had classmates called Venables, Atkinson, Temple and Bromwich. Do any schools today continue the tradition of addressing pupils only by their family name? Surely not. It was this imposed formality that prompted, by way of a welcome side-effect, the ingenious invention of distinctive nicknames. Venables, for instance, was actually Charles A. Temple Venables, so his initials were C.A.T., which obviously became Dog, which was naturally lengthened to Dogsbody then inevitably shortened to Bod. Bod Venables. This made me laugh like Billy-O. 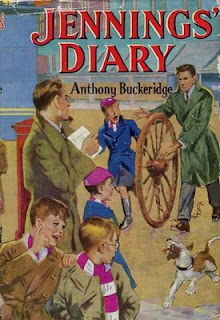 In the nearby village there was a shop which sported a memorable sign:

This is where our chums went for jam doughnuts and bottles of fizzy lemonade. In one episode Jennings and Darbishire had tell the proprietor, known mysteriously as Chas. and never Charles, that the problem with their bike was that 'the black back brake block's broken'. But they couldn't say that, because nobody can. 'My bike's black back brake block's broken'. This is still very funny, I think. I also relished Buckeridge's elaborate profanities ('Fossilised fishhooks!') and the volcanic rages of 'Old Wilkie', aka Mr. Wilkins, Jennings' choleric form master.

My own high school (a pretentious grammar dedicated to the production of mid-echelon public servants) was  inevitably a disappointment, although it was an entirely male sodality, we all addressed one another by our surnames and we did have to study Latin. It was a very pale imitation of Linbury Court and although we had our fair share of eccentric (indeed 'troubled') masters and corporal punishment and unchallenged traditions (centred around the house system - Sparta! Athens! Tuscany! Troy!) there was a complete lack of the anarchic energy and generously rebellious spirit incarnated by Jennings and company. We had to wear bottle-green uniforms, including little caps.

What prompts this blog? Walking along Hornsey High Street in North London this morning I saw a modern-day equivalent to the Buckeridge shop sign: