On L. T. C. Rolt and the Talyllyn Railway

Unpacking a box of books the other day I came across a favourite from my childhood: Railway Adventure by LT.C. Rolt, published in 1953 (and my copy, published by Pan Books in 1971 by Pan Books at 7 shillings (35p) is shown below). It described his involvement in the preservation of the decrepit and picturesque narrow gauge Talylllyn Ralway in Wales, and it was this  book that inspired the Ealing Studios production The Titfield Thunderbolt. (I've often wondered why the film wasn't shot on the Talyllyn itself.)

It was Rolt (known to his friends as Tom) who more or less single-handedly started the whole industrial heritage industry (if that's what it's called) - the maintenance, largely by dedicated unpaid volunteers, of old railways, canals, mills, pumping stations, tramcars and so on. 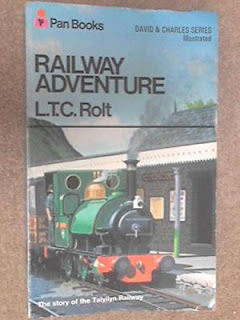 He was born in 1910. An engineer by training, he published around forty books including two notable biographies of engineers: Isambard Kingdom Brunel and Thomas Telford. (lSee Adrian Vaughan's thoughtful demolition of the Brunel myth promoted by Rolt and still circulating today.) I've read only Railway Adventure and his brilliant three-volume autobiography Landscape with Machines (1971), Landscape with Canals (1977) and Landscape with Figures (1992), the latter two published posthumously. They are all recommended, as is this website dedicated to the man and his works.

What I wanted to include in this blog - but could not find online - were some of the wonderfuldrawings by the artist James Boswell included in Railway Adventure, which caught perfectly the look of the old line before restoration when the route was little more than an overgrown undulating footpath between Towyn and the abandoned slate quarry at Bryn Eglwys (the original line's raison d'être). Boswell will be the subject of a future blog. The preserved railway of today has a certain charm, but the original - as described by Rolt - was the stuff of dreams. Here's a delightful short film from the 1950s, made for North American audiences, that captures the gorgeous dereliction of the line in the early days of preservation, running thorough 'the gaunt and silent heights' of west Wales. 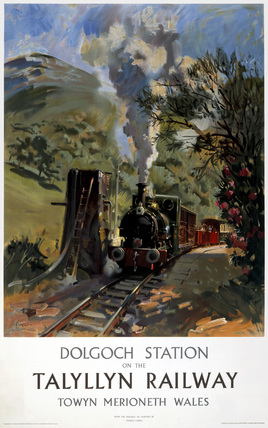 It's the dilapidation that is so attractive, the spectacle of something on its last legs but still - just about - serviceable, and (to stretch a point) an image of Britain after Suez. The prompt to conservation was to the amateur, or the professional on his day off, and I wonder now whether there wasn't some underlying memory of the General Strike in 1925, when public schoolboys and Oxbridge undergraduates were drafted in to drive buses and keep the railways running (a minor aspect of a strike involving nearly two million workers who had come out in support of coal miners whose wages had almost halved over seven years). At school on learning of all this I recall siding with the miners, although we were all being quietly groomed as potential strike breakers in the future - what larks!

I visited the Talyllyn railway as a boy in the early 1970s, and took my own son there when he was eight. It was great fun, the scenery was lovely and our engine (one of the originals, called Dolgoch) chuffed and hooted confidently up the line without missing a beat. But what had been an eccentric bolt-hole for railway enthusiast was now a major tourist attraction - the line relaid to very high standards, no longer a meandering grassy path with rusty iron rails, the unlurching carriages no longer hemmed in by shrubs and trees, with Welsh sheep wandering along  the track. The new bogie carriages were very smart, the engines all gleamingly restored and as good as new; there was plenty of catering and shops and a big museum. Dare I say it? I wanted a more comfortless and unpredictable experience. I wanted the train to come off the rails, or the engine to run out of steam or something mechanical to drop off. I wanted to drink a mug of stewed tea from a big urn and munch spam sandwiches. I wanted a sense that our driver, like a wartime bomber pilot, was 'nursing the old crate back home'. What I wanted, in fact, was to experience the railway before it was preserved, as described in Railway Adventure because it was the run-down condition of the line that made it worth preserving. I wanted to share his joy. But all that was already long, long ago. The line's original locomotive Dolgoch, built in the 1860s, had been so throughly restored that very little of the original locomotive remained ('perhaps one of the buffers' a wag in the engine shed told us). So the old engine was like the philosopher's broom with two new heads and three new handles - a broom still, but not the broom.

Preserved railways tend to be wholly preserved now - perhaps it's time to let them become run down and dilapidated again?