Anthony Burgess was a looming and beneficent cultural presence throughout my adolescence, and the first serious modern novelist I read in quantity. He was the kind of public intellectual we don't see much any more - always smoking slender cheroots, sporting a combover that would make Donald Trump's cloudy pompadour look lifelike and talking ten to the dozen about everything under the sun, in several languages, often simultaneously. Polymath essayist, critic, cultural pundit, screenwriter, eloquent champion of Joyce and other highbrow modernist authors, composer (which he perversely insisted was his true vocation) and much else besides. He was a one-man cohort. I note that February 2017 will be the centenary of his birth and I expect there are big plans to mark the occasion, although I don't imagine the Post Office is about to issue a set of stamps.

Is he read much these days? I suspect not. He's too clever, too wide-ranging and impersonal, too erudite. He expects a lot from his readers, and even meeting him half way can be an effort. He would have benefitted from tougher editing - the later books became baggier and he was prone to repeat himself (hardly unexpected, given his prodigious output). The Roger Lewis biography in 2002 both nailed and skewered him and I wonder whether his reputation will ever fully recover. Lewis developed a bilious loathing for his quondam literary hero and the biography was a spiteful 500-page hatchet job, the Prologue alone describing the subject as lubricious, sentimental, callous, superficial, crapulous, arcane, laborious, sanctimonious and "essentially a fake". Perhaps we should stick to the books and ignore the messy life.

In March 1985 Burgess published a little firework of a pot-boiler (if such a thing is possible) entitled Ninety-Nine Novels: The Best in English since 1939. His highly subjective but critically generous choice appears in full below. 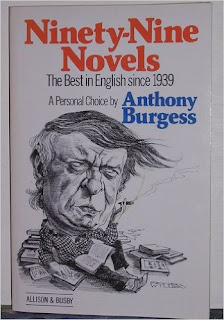 There are not a few omissions, not least of some fine novels by Burgess himself (Nothing Like the Sun is a brilliant biography of Shakespeare written in Elizabethan vernacular; A Clockwork Orange used to be the book we all read, an equivalent to Catcher in the Rye and To Kill a Mockingbird). He restricts himself to works published first in English, which explains the lack of novels in translation. Fair enough - and I'll follow this self-imposed constraint when I blog more about this tomorrow.

Below is the full Burgess list. In an access of candour I've highlighted the 45 I haven't read (and in some cases, I'm ashamed to say, never even heard of). I find I've read 54 of the 99 (if Anthony Powell 's 12-volume sequence A Dance to the Music of Time counts as one, which it surely shouldn't) This is not particularly impressive for somebody who aims to earn a crust as a reviewer, but then you can't read everything (unless you're D. J. Taylor). Ready?

The Burgess list ends here, with a flurry of titles that continue to evade my interest or repel my attention. Lanark and Riddley Walker aside (both of which I've re-read several times with increasing admiration), I'm not missing anything much, am I?.

Odd that Burgess includes Nabokov's novel Defence (first published in Russian in 1930 as Zashchita Luzhina) but not Lolita (1955). But let's not quibble over omissions, for now. Let's not even mention in passing the startling absence of Vonnegut, say, and Pynchon.

I'm struck by how few of Burgess's choice of novels from the 1970s I've read. Admittedly I was a schoolboy and later an undergraduate throughout the decade, with very little time for serious reading, or at least very little time for reading contemporary fiction. But it's not a compelling list, is it? The first half of the 1980s isn't much better, although it does feature one of the great novels of my lifetime, Alasdair Gray's magnificent Lanark. But things improve dramatically in the second half of the decade. Invited (by myself) to choose a further 33 novels covering the three decades since 1983, I gladly accepted the challenge. It turned out to be much harder than I though it would. You can see the shocking results tomorrow.
Posted by David J Collard at 09:35