Here's a poem from Andrew Elliot's excellent collection Mortality Rate (CB editions, 2013). I know nothing about the poet (and nor, intriguingly, does his publisher, who has never even met him), although I read somewhere that he comes from Northern Ireland and now lives in London. His first two collections, The Creationists (1988) and Lung Soup (2009) were published by the Belfast firm Blackstaff Press. He never does readings and, books aside, has no presence on the internet. I've just ordered a copy of Lung Soup from abe.com and will report back. All the signs are good: the poet and novelist Ciaran Carson wrote: ‘Lung Soup is a tour de force: nearer perhaps to the prose of Thomas Pynchon or Italo Calvino in its play with genre than any I can think of.’ But back to today's poem, which is called 'Angel':

When people come up to me in the street -
it happens most often in Manchester -
with their hands all ready mine to shake
and tell me to my face, You're great, you are!

I just completely blank them, wincing at the stuff
like, Grumpy cunt! which they feel free to gob
at my back (bent though it be in an old brown mac),
half wanting to snarl at them over my shoulder . . .

Instead, I comfort myself in the knowledge
that they, being wrong, and not to know,
have most likely mistook me for Mark E. Smith
who has come to resemble, not so much Hitler

as the actor who nailed him in Downfall
(whose name I can't remember) but who had,
until then, been perhaps best known
for his angel in Wings of Desire.

(Admirable, the clunky gaucheness of: 'their hands all ready mine to shake'.)

I suppose sooner or later we all get to look a bit like Mark E. Smith (who in turn seems to be channeling not so much the actor who nailed Hitler in Downfall as  the self-destructive snooker genius Alex 'Hurricane' Higgins in his later years). I saw Smith's band The Fall perform many times in Manchester in the late 1970s - a hard-working unpredictable combo with Smith's ramshackle genius holding things together, prowling the stage, supping pints, sneering and snarling eloquently, looking intense and ill and eaten away. Now that Manchester has been botox'd into a shiny simulacrum of the run-down, grimy post-industrial city I remember, Mark E. Smith's face is a living record of the place as it used to be, an accusation.

In 'Angel' Smith and Hitler already jostle for the reader's attention, and a third named man would overcrowd the poem, so Elliott shrewdly chooses not to remember the actor who played Hitler in Downfall and one of the angels in Wim Wenders' Wings of Desire. It was was Bruno Ganz, of course. I suppose he's best known (at least outside Germany) for these two films, but any cinephile with roots in the late 1970s, and especially any cinephile living close to the Aaben cinema in Manchester's Hulme district, would have known Ganz for his 1977 appearance with Dennis Hopper in Wim Wenders' American Friend (adapted from Patricia Highsmith's novel Ripley's Game) and for his appearance two years later opposite Klaus Kinski in Werner Herzog’s Nosferatu. Wenders (and Herzog and Rainer Werner Fassbender and others) were art house staples in the decades before video and DVD killed cinema.

The Aaben has long been demolished, along with the run-down brutalist Hulme estate within which it nestled. It was a stone's throw from The Factory, a now-legendary music venue known locally as the PSV Club, a hang-out for off-duty bus crews. The Aaben had four screens separated by paper-thin walls, so you could hear other films playing in adjacent studios. It was a dank place, the once-plush seats lumpy, the carpets sticky. There was a cafe selling egg sandwiches and instant coffee, and smoking wasn't so much tolerated as obligatory. It was here I had my real education, seeing hundreds of films old and new, from Renoir and Ophuls to Indiana Jones. It was like heaven and one could imagine angels from Wenders' Der Himmel über Berlin (we'd always insist on the original title, we earnest Mancunian cinephiles) crouched singly, silently, in the pungent stalls. 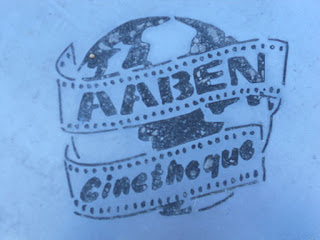 I remember seeing Mark E. Smith in the dim-lit and aromatic lobby more than once. Tall, stooped and intense, smoking of course (we all were) and, in that pre-celebrity era, a celebrity. He had a cackling wheezy laugh and smoked (then, at least) in a way I came to associate with Manchester, the fag cupped in the hand against the wind (even indoors, and especially indoors). The Fall, after countless changes to the line-up, are still fronted by the weather-beaten, rasping Smith, and still (whenever I hear them) astonishingly original.