A terrible loss to literature. Hilary Mantel was a formidably gifted and original novelist and if you get this newsletter you've almost certainly read some of her books. If not, don't hesitate.

Hilary Mantel was the author of nine novels and three collections of short stories in addition to her prize-winning trilogy about Thomas Cromwell. She began to write for the LRB in 1987 and contributed more than fifty pieces to the paper on subjects ranging from some of the Tudors who appear in her trilogy (Jane Boleyn, Queen Mary, Charles Brandon and Margaret Pole) to some of the figures who appear in A Place of Greater Safety, her novel about the French Revolution: Danton, Robespierre (twice), Théroigne de Méricourt and Marie Antoinette. Royal Bodies, her Winter Lecture for the LRB, considered the public perception of royal women from Anne Boleyn to Kate Middleton: ‘we don’t cut off the heads of royal ladies these days, but we do sacrifice them.’ She also published several pieces of memoir in the LRB, on her childhood, the misdiagnosis of her endometriosis as mental illness, and the childlessness that was its result. Mantel Pieces: ‘Royal Bodies’ and Other Writing for the London Review of Books was published by Fourth Estate in 2020.

The LRB has removed the paywall so you can read her matchless essays here.

The same message as last week. Please give what you can, when you can. The most far-reaching aid programme has been, and remains, the British Red Cross Ukraine Crisis Appeal. You can donate quickly and easily here. 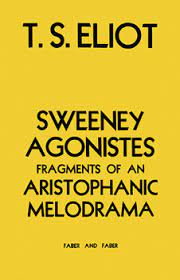 Part of this week's programme marks T. S. Eliot's birthday (tomorrow, in fact) with a staged reading of his bizarre and very rarely-performed short play Sweeney Agonistes: Fragments of an Aristophanic Melodrama, with a cast featuring Paige Niblet and Alex Kapila as Dusty and Doris, David Henningham as Sam Wauchope), Ray Davis (Klipstein/Swarts), Tony White (Krumpacker/Snow) and myself as Sweeney.

Kevin Davey will introduce the play and afterwards talk about his novel Playing Possum, which took Sweeney Agonistes as a starting-point. We'll welcome back our roving reporter Melissa McCarthy, who will share some thoughts about 'wobbly photographs'. And I'll be looking at the promotion of British values overseas in 1933 (the year Eliot's play was first performed). What were those values? And what are they now?

The mighty Fitzcarraldo this week released their Spring 2023 catalogue - and it's simply breathtaking!

While We Were Dreaming by Clemens Meyer, tr. Katy Derbyshire

This is Not Miami by Fernanda Melchor, tr. Sophie Hughes Brian by Jeremy Cooper

The Plague by Jacqueline Rose

Full details of all these and other Fitzcarraldo publications here.

Many of you will be following Glue Factory favourite Toby Litt's absorbing year-long project A Writer's Diary - daily entries of which he shares to online subscribers.

This diary will be published in book form by Galley Beggar Press on 1st January 2023 and you can now pre-order. All pre-orders will be signed first editions, and come with a limited edition set of three especially designed bookmarks.

Pre-order (and read an extract) here.

The nation’s favourite annual guide to the short story, now in its twelfth year.

This critically acclaimed series aims to reprint the best short stories published in the previous calendar year by British writers, whether based in the UK or elsewhere. The editor is the author Nicholas Royle (well known to Glue Factory audiences) and his brief is wide ranging, covering anthologies, collections, magazines, newspapers and web sites, looking for the best of the bunch to reprint all in one volume.

This year the authors include Glue Factory contributors Ben Pester and Tony White (whose brilliant and hilarious story 'Plain Speaking' was written for The Glue Factory and featured on the show in March).

There is also a story by the late Uschi Gatward author of English Magic, who sadly died last year.

The Barbellion Prize is a book prize dedicated to the furtherance of ill and disabled voices in writing. The prize is awarded annually to an author whose work has best represented the experience of chronic illness and/or disability.

The Prix Goncourt offers a symbolic €10 prize, where its prestige is the greater reward. In some way this would be interesting to pursue, book prizes always come with complex talk and discourse, and it’d certainly be easier at least to maintain the prize if some sort…

We can maintain our existence in finding a regular benefactor, sponsor, or by better fundraising. With all of that we still need more support in the short term. You can donate to the prize via Paypal:

5. Rufo Quintavalle klaxon!
Paris-based poet and actor Rufo has sent advance warning about a couple of happenings coming up either side of the Channel in the first week in October.
On Monday October 3rd he will be the featured guest at Spoken Word Paris reading from his new book, Shelf, which is a line-by-line rewrite of Walt Whitman's Song of Myself. This featured on Carthorse Orchetsra last year, as I'm sure many of you will recall. Shelf  was published last year by awesome New Jersey publisher Sagging Meniscus Press but because of Covid Rufo never really had a launch party - so consider this a belated launch! You are all cordially invited to Au Chat Noir, 76 rue Jean-Pierre Timbaud, 75011 Paris from 20h onwards. Details below:
https://spokenwordparis.org
https://www.saggingmeniscus.com/catalog/shelf/
And for readers in the UK The Passengers of the Night will be having three special screenings on the 5th and 6th October in London's West End as part of the BFI London Film Festival. Rufo acted in this film last year  - again during those strange days of Covid and confinement - and (he says) is very proud that it will be screening in his home town.
https://whatson.bfi.org.uk/lff/Online/default.asp?BOparam::WScontent::loadArticle::permalink=passengersofthenight

7. SHORT FICTION/UNIVERSITY OF ESSEX INTERNATIONAL SHORT STORY PRIZE
The winner of this year's prize is 'AOIFE' by Trahearne Falvey. Read it here, brilliantly illustrated by Rebecca Cottrell: https://buff.ly/3S8LxQS
He has a website: https://trahearnejf.wordpress.com/

The 2023 longlist was announced this week.

The judging panel of Bob Johnston of the Gutter Bookshop and literary agent Simon Trewin, was joined by Rachel Donohue whose short stories were shortlisted for the Hennessy New Irish Writing Award in 2013 and 2014 and who won New Irish Writer of the Year in 2017. Her critically acclaimed novels, The Temple House Vanishing and The Beauty of Impossible Things are published by Corvus.

Our judges have the unenviable task of choosing a shortlist from the longlisted authors listed below. The shortlisted stories will then be published here at Writing.ie later in October so that you, the readers, can decide on the winner of the Writing.ie Short Story of the Year 2023.

The shortlist will be announced in October, when those stories will appear in print.

Congratulations to the following authors, listed in no particular order:

Here's a thing - you can get MUBI free online for seven days and currently available are the films of John Smith. If you don't already know his work you have a treat in store.

In the 1970s, Smith was an active member of the London Filmmakers’ Cooperative, an artist-run organization dedicated to the moving image, and largely associated at this time with the formalist rigor of so-called structural or materialist film. Alongside these influences, the Walthamstow-born artist was also interested in the potential of narrative and the power of humor. Taking to the streets of London (as well as looking, often, to its skylines), he observes the world with unwavering wit. On top of this, Smith captures a certain kind of East End Englishness that takes pleasure in pubs, puns, and rhymes. Smith ends up finding poetry in all sorts of unexpected places: even in the label on a bottle of laundry liquid.

The Girl Chewing Gum (1976) rightly remains a classic of experimental film: like the later Shepherd’s Delight (1986) and The Black Tower (1987), it playfully and surprisingly undermines the assumed power of the director and the first-person voiceover. Smith’s irreverence toward authority extends to British bureaucracy, as seen in Blight (1996) and Citadel (2021), two takes on the city symphony genre that are heavy not with awe, but with protest. Both rally community spirit. If Smith meddles with our perception, then it is to sharpen our collective critical eye. When Om (1986) and Dad’s Stick (2012) ask us to look and then to look again, Smith is reminding us, ultimately, that what we’re being told might not always be the whole picture.

A welcome return to this highlight of the publishing year following the pandemic. This year 69 small publishers will gather for two days at Conway Hall in Central London, including many that have featured on our weekly gathering:

Admission is free to the Fair, to all readings and talks and to an exhibition curated by S J Fowler Conway Hall, Red Lion Square, London, WC1R 4RL

It's a happy coincidence that two of the very best novels published this year, by two of my favourite authors, both happen to share an interest in the White Horse of Uffington, an ancient chalk figure carved into chalk on an Oxfordshire hillside. Here it is. But can you name the novels (answer at the foot of the newsletter).

Your newlsetter editor (left) on his second pint of Guinness seen here with Undone publisher John Mitchinson (centre) and author Patrick McCabe at the London launch (in the Boogaloo pub, Highgate) of Patrick's astonishing novel-in-verse (sort of) Poguemahone. Seen here not sharing a joke

It was a perfect venue - the Pogue's Shane McGowan lived for some years above the pub and many legendary nights have unravelled there. The launch was among the very best I've ever been to, because as well as exemplary hosting by John and his lovely team, and superb readings by the author (and I mean really superb, absolutely monumental) we had lovely music from Louis Beau  followed an open mic with a roster of singers, musicians and comedians.

Among these was a stand-up comic called Johnny White Really-Really. he was new to me, and a revelation. I've rarely heard such brilliantly crafted comic monologues so beautifully delivered. He has a podcast.

Next Sunday marks the 150th anniversary of the day Phileas Fogg set out to win a wager by circumnavigating the globe in eighty days. So we'll celebrate that.

We'll explore contemporary Ethiopian fiction in the shape of The Lost Spell by Yismake Worku with its translator Bethlehem Attfield, and publishers Henningham Family Press. There's a feature on the brilliant British film-maker John Smith, and other guests to be confirmed.

In the week that Kwasi Kwarteng, the Chancellor of the Exchequer, announced reckless changes to the tax system that favour the super-rich and discriminate cruelly against the poor, a chap on Twitter called James Cook summed up the impact of his policies thus:

I saw a homeless guy  and I felt bad for him.

So I did what I think any of us would do - drove to a nearby affluent area, found the         biggest, nicest house and put a tenner through their letter box.

You mark my words, before long that money will trickle down to the homeless guy.

If you enjoy this weekly newsletter and the live gatherings please donate (generously and regularly) to The Trussell Trust (or your local equivalent outside the UK). A tenner does good.

Horse attitudes (answer). It's The White Horse of Uffington and features prominently in two of this year's very best novels: Treacle Walker by Alan Garner (shortlisted for this year's Man Booker Prize) and My Mind To Me A Kingdom Is' by Paul Stanbridge.