On translating a Beckett poem

At a recent Leap in the Dark, Aea Varfis-van Warmelo delivered Beckett's original poem and shared her thoughts (as a bilingual French speaker) on the attempts at translation. Here are the notes I would have referred to if I'd managed to print them out in time for the broadcast. 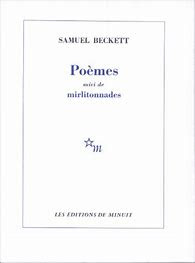 In 1978 Samuel Beckett published Poèmes, suivi de Mirlitonnades, the latter consisting of around forty verses (a vers de mirliton is French for doggerel, from mirliton, a penny whistle). They’re all very short and deceptively simple, like this one:


copyright The Estate of Samuel Beckett/Faber and Faber

21 words in nine lines, or rather just 7 words (alphabetically beau, ceci, cessait, imagine, jour,  si, un) carefully repeated, and it’s a metaphysical epic. The dying fall of si ceci/cessait is wonderful, with its background English exhalation of 'cease' (upon the midnight with no pain?) and we'll return to it in a moment.

Much of Beckett's French poetry has never been translated. Much of it is regarded as untranslatable, and especially the mirlitonnades.

The Collected Poems, edited by Sean Lawlor and John Pilling for Faber runs to an astonishing 500 pages, although around half of that is the editors' exhaustive Commentary. It certainly earns its bulky place next to the 1977 John Calder edition (147 pages) and the notoriously slipshod Poems 1930 - 1989 (Calder again, but expanded to 226 pages, with one of the 'newly discovered' poems attributed to Beckett actually by Robert Browning). In a Guardian review of this edition Christopher Ricks  compared two translations of this mirlitonnade. The first, by Kevin Perryman,  appeared in Babel magazine in 1990:

'The hinge', says Ricks, 'is the turn "ceci / cessait", and Perryman's "all this / stopped" is abrupt and jagged where the original is shady stealth.'  The second version, by the American poet and translator Marcia Karp, comes closer to the original, but not very close:

I'm not sure about that 'this this' though. Try saying it aloud. Where should the stress fall? I'm sure I couldn't do any better but, prompted by the Ricks review, I decided to have a go.

I think it's best to replace 'imagine' in English with the more diffident and idiomatic 'say'. (The word 'imagine' in English carries an echo of John Lennon and, more horribly the celebrity take on that rotten song that has done so much to lower the tone of the plague). 'Say' keeps the sense if not the sound or rhythm, but allows something approximating the euphony of si ceci/cessait admired by Ricks.

Mneh. Not quite there. 'Ceased' is better than 'dissolved' in the second version, I think, because it conveys an abruptly temporal meaning. Dissolution suggests space as much as time, and I don't like the tongue-twister sibilance between 'this' and 'ceased'. So what if, instead of 'this' in the first line, we use 'lot', as in 'A policeman's lot is not a happy one'? 'Lot', in other words, in the rather fatalistic sense of one's allocated span or condition, one's fate or destiny, with a faint echo to the Old Testament figure fleeing the ruins of Sodom, a place where things 'ceased' abruptly. This works if we adopt the Perryman approach and substitute 'stopped' for 'ceased'. Here's my final version, or at least my latest draft:

Does lot/stopped work? The past tense verb has a /t/ end sound, so it's a good approximate rhyme. All the words are monosyllables, which have a pared-down quality true to the spirit of the original and of the other mirlitonnades. Nine lines still, although using eight different words, not seven as in the original. Twenty-two words in total. Perhaps I should cut the 'all' in line 7? I'm tempted to render that last word ('imagine' in the original, 'say' in my draft version), as 'as it were', echoing an earlier Beckett novel title: Comment c'est / How it is (1961). So here they re side by side, Beckett's original and my attempt at a rendering:

The Lawlor/Pilling Collected Poems tells us that 'imagine si ceci' was first published in Hand and Eye, a limited edition homage to Sacheverell Sitwell (Edinburgh: Tragara Press, 1977). The original line 7 ('si ceci') appears in three manuscript versions in Beckett's hand but was omitted in the version he produced for Editions de Minuit, which has perpetuated this omission ever since. Was the omission an error? In the penultimate version, written by Beckett for Josette Hayden on the back of a cigarette packet, the stealthy lines admired by Ricks are replaced by 'pouvait / s'atténnuer'. That's problematic. 'Atténnuer' can mean to lessen, or to palliate (both very Beckettian words), to mitigate and so on, and on. Any suggestions?

Poem copyright The Estate of Samuel Beckett / Faber and Faber