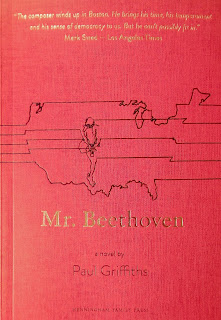 The author Paul Griffiths is a distinguished music historian and critic,  and his novel is prompted by an intriguing historic footnote in Beethoven's life. In 1823, the 52-year-old composer received a commission to write a Biblical oratorio in the United States. He never crossed the Atlantic to do so - but what if he had? Griffiths explores this hypothetical visit, coupling a profound knowledge of his subject with narrative flair.

As Beethoven wrestles with his muse, and his librettist Rev. Ballou, he comes to rely on two women. Thankful, who conducts his conversations using Martha’s Vineyard sign language, and a kindred spirit: the widow Mrs. Hill. Meanwhile all Boston waits in anxious expectation of a first performance the composer, and the world, will never hear.


This novel is among many cultural highlights marking the 250th anniversary of Beethoven's birth on 16th December 1770 and, in line with their established practice, the Henninghams have produced two versions of the book - a beautiful edition de luxe (all but a handful of copies have been snapped up) and an equally covetable trade paperback 'litho printed in lilac-grey. French-fold red Takeo cover debossed with gloss black and gold design.' Few publishers can match HFP's stratospherically high production standards.


We should all be supporting our authors and indie presses at this time and you can order your copy from the publishers here. And look out for a forthcoming Leap in the Dark on Saturday May 9th to mark the publication, with readings by the author and an exclusive behind-the-scenes tour of the Henninghams' studio


While we're on the subject there's an earlier book by Paul Griffiths that I never tire of recommending: let me tell you, in which Shalespeare's tragic Opehlia is given a voice and fresh agency with which to tell the story of her life.  It's a short, elegant, beautifully-realised Oulipian exercise in which the author employs only the words that Shakespeare gave her in Hamlet.


This mandated vocabulary is deployed with great wit and ingenuity and a fine ear for rhythm and euphony. As the text accumulates the repetitions and variations begin to mesmerise, as do the  many ingenious compensations; Ophelia cannot, for instance, use the word 'mother' as her creator doesn't use the word, yet has much to tell us about the woman. 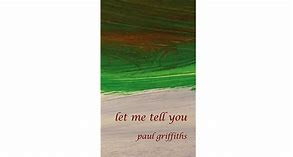 let me tell you was published in 2014 by the Hastings independent Reality Street Editions. I think it's now out of print, but you can easily find copies on abe.com. (Life hack: use this website to find books but don't order through it as you'll be further enriching Jeff Bezos; simply contact the bookseller and buy direct from them.)