The Blaze of Noon by Rayner Heppenstall

In 1939 the author Rayner Heppenstall (1911-1985) published his astonishing first novel The Blaze of Noon. This brilliant debut was critically acclaimed and sank without trace. 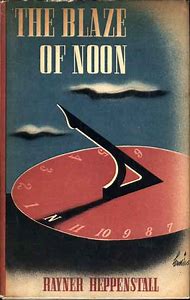 The outbreak of the war in September was a distraction and the author, Yorkshire born and bred, had a German-sounding name which may have counted against him. Heppenstall's career picked up after the war but it was an odd one by any standards - see his erratic bibliography here.

Heppenstall is interesting - a minor author certainly, but a huge influence on a generation of experimental writers in the middle of the last century. He was a close friend and mentor of B. S. Johnson (a fact curiously overlooked in Like a Fiery Elephant, Jonathan Coe's excellent biography of the latter). A well-connected 'man of letters' and a close friend of George Orwell, he was also a self-confessed cannibal, but that's another story for another time. The Blaze of Noon is a really outstanding novel, and I never tire of recommending it, but it's fair to say Heppenstall's reputation was never to match this spectacular debut.

I think of Heppenstall's stalled career whenever I see another book launch cancelled. My heart goes out to any author being denied their modest moment in the spotlight and the chance to sign some books. They are jolly occasions and for many of us as close as we care to get to the social whirl. It's a chance to gossip and trade horror stories about agents.

Having said that, I hope that book launches (when they return) will become more  . . . ambitious. Not just a bunch of people mingling as the drink kicks in, not just a modest speech followed by a reading, accompanied by tepid publisher's plonk and Kettle crisps. There should be live music, readings by actors, perhaps a performance - an event, in other words, with a seated audience, proper booze (spirits are better than wine) and some decent grub. You also need somebody with plenty of chutzpah to bellow persuasively at those gathered to buy copies on the night - that's what it's all about. Make it a proper party - the kind of thing I've aimed to offer audiences attending a recent series of literary cabarets I organised in London.


The most recent event I organised is likely to be the last of its kind for a while. A Leap in the Dark was held on February 29th in a derelict Conservative Club in Paddington with a wonderful cast featuring Melanie Pappenheim (singer) Helen Ottaway (musician/composer), Tim Etchells (performer), Amy McCauley (poet/perfomer), Michael Hughes (novelist), Aea Varfis-van Warmelo (actor), Anna Aslanyan (author/critic), Neil Griffiths (author) and Natalia Zagorska-Thomas (fabric conservator and gallery owner). We had music and poetry, performance and discussion. Plenty of whiskey and sandwiches and cake, and a very convivial evening. We could have launched a book if there'd been a book to launch . . .

Here are some pictures:

That kind of gathering is, for now, a thing of the future. But we can still gather online, and I'm planning a series of similar shindigs to link performers and a live audience. I'll tell you more when I know more.