'Jack Robinson' is a - well what? Nom de plume? Nom de guerre? Pseudonym? Alias? I shall respect the author's anonymity, except to say that he is a fine poet who, under the name of Jenny Robinson, once won a literary prize for women, which caused quite a stir at the ceremony when he stood up  to accept the award.

Robinson has to date published three books of prose - Days and Nights in W12 (2011), Recessional (2015) and by the same author (2016). They are slim volumes and richly satisfying, thoroughly achieved exercises in style and content, bright and generous and (rare enough, this) they prompt and reward regular re-reading. 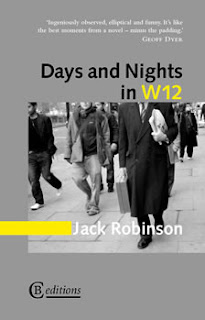 Days and Nights in W12 adopts - or rather adapts - a Sebaldian approach to the west London district of Shepherds Bush, where the author lives. Robinson is an attentive flaneur/topographer. There are more than one hundred entries, alphabetically arranged from A ('A & E', 'allotment', 'ape' 'Austin A35') to Z ('z') an each one-page entry is accompanied by a black and white photograph (taken by the author), accompanied by a short text. Sebaldian, but without that author's detached Eeeyoreish quality. (You know the sort of thing: 'I arrived in the centre of Great Yarmouth on Saturday afternoon and there was not a living soul to be seen'.) Robinson is lighter and more engaging and more plausible. Unlike Sebald's sometimes neurasthenic perspective we can see and share the world Robinson sees. We co-habit.

Some of the locations were immediately familiar to me as a former resident of the Bush - the covered market, local businesses along the Uxbridge Road, the old and new libraries and (improbable as it may seem) the 'village hall;  These are wonderfully evocative fragments of a modest urban epic, an English take on Walter Benjamin's Arcades Project. Geoff Dyer (clearly a fan) says that ‘It’s like the best moments  from a novel – minus the padding’ and he's right; these are also (to mix metaphors) dark caffeine shots in a world of milky lattes.

Recessional is a scathing polemic prompted by the banking crisis, a ferociously funny denunciation of the bastards who screwed things up for us all, and the oligarch beneficiaries of their crimes. It's especially worth reading now that things have really fallen apart. You can read it online here.

Published earlier this year is the lower-cased by the same author. This was prompted by an inconsequential event: a book left behind on a cafe table, a waiter chasing after the customer to return it. On this modest premise Robinson builds a dazzling succession of reflections and meditations on - well, everything under the sun from bonfires to book covers. (I'm reminded of Raymond Queneau's matchless Exercices de style  (1947), prompted by a  comparably humdrum urban episode). It's a book about reading and what being a reader involves these days. It also proves that less is more, and that the best things come in small packages. 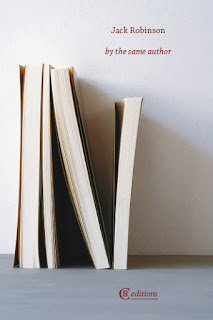 If you don't read these you don't know Jack, so look sharp and order all three books from the publisher here.