If you're looking for some small plastic figurines to commemorate Bloomsday look no further than the Little Giants Mini-Figures Boxed Set of Writers produced by a company called Jailbreak Collective. The set consists of Shakespeare, Joyce,Twain and Poe. Here they are: 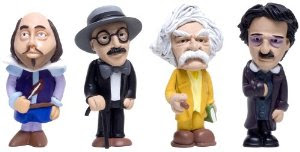 Of the Mark Twain figurine a breathless copywriter says: 'Few American writers have influenced the world as much as Twain! With his trademark hair and moustache, the Tom Sawyer scribe comes to life as a 3-inch plastic figure with a cigar in one hand and a book in the other.'

With a thick black moustache, bow tie and glasses; the Joyce figurine bears a striking resemblance to Groucho Marx, a fact that would have tickled both men. Speaking of Groucho I came across this exchange recently, starting with a letter from Leonard Lyons of The New York Post

You may remember that when I introduced you to Brendan Beham at the Algonquin you spoke of "Finnegans Wake". Behan said that in the Algonquin at the time was a man who really understood the Joyce book - Thornton Wilder.

I mentioned this to Wilder. Yesterday, after he evidently did some research, Wilder wrote me:

Re Groucho and "Finnegans Wake" - I have long thought he was in the book. Weren't the Marx Brothers once in a skit about Napoleon? I seem to remember them wearing tricornes, etc. Anyway on pages 8 and 9 there is a visit to the Wellington Museum at Waterloo, and I read . . .  'This is the three linoleum Coyne Grouching down in the living fdtch."

Wilder once tried to explain to me the key to "Finnegans Wake" - involving his constant use of puns. The three linoleum Coyne must be a reference to the Napoleon-style hats. And Grouching makes you a verb.

On the authority of Thornton Wilder, the foremost Joyce scholar of the world, you can be assured  that you are in "Finnegans Wake".

To which Groucho replied, a week later:

There's no reason I shouldn't appear in "Finnegans Wake". I'm certainly as bewildered about life as Joyce was. Well, let Joyce be unconfined.

A good phrase to sign off with. Happy Bloomsday.