Alasdair Gray's magnificent novel Lanark consists of four sections arranged in the order Three, One, Two, Four, bracketed by a Prologue and Epilogue (appearing long before the end of the book) in which the author himself explains the thinking behind this structural device: 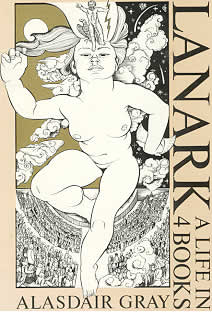 This he achieved and much else besides. Lanark took Gray some thirty years to write and, when it was eventually published in 1982, was immediately recognised as a masterpiece. It has never been out of print and remains this prolific author's best-known work, a canonical 20th century novel and, if you insist, a 'classic'. I read it and re-read it when it was first published and have more or less kept up with Gray's monumental oeuvre ever since. He's a great writer.

Lanark has now been adapted for the stage by the Scottish playwright David Greig and director Graham Eatough in a co-production by the Glasgow Citizen's Theatre and the Edinburgh International Festival. "Please note this performance contains adult themes" warns the EIF website. It certainly does: birth and death, love and politics, philosophy, art and science. This is a big book, and a correspondingly big play, and the production is faithful to the spirit of the novel but not slavishly so. In a recent interview the director said "our aim is to do in theatre what Lanark does to the novel – to play with the form." I'll come back to this later.

There is playfulness in abundance on stage, and wholesale artistic larceny. Among the multiple plagiarisms  (cheerfully admitted and listed in the programme, an approach which itself plagiarises Gray's own list of plagiarisms in chapter 40 of the original novel), the director cites the mechanical wings worn by Sam Lowry, the hero of Terry Gilliam's dystopian film fantasy Brazil. There are also acknowledged debts to Lou Reed, Pina Bausch, Phillip Glass, The Beatles, Samuel Beckett, Robert Wilson, Flanagan & Allen, Sarah Kane, Bill Viola, The Sensational Alex Harvey Band and Xenophon, among many others. This sounds like a mish-nash of conflicting ideas (and what's wrong with that?), but the production is persuasive and coherent, not least thanks to wonderful set and costume designs by Laura Hopkins (whose previous work with the company was the award-winning and internationally-acclaimed Black Watch).

She has created five distinct realms: the hellish nocturnal city of Unthank (in its early and late incarnations), the heavenly Provan (which resembles a Commonwealth Games opening ceremony), the Intercalendrical Zone (some brilliant if under-powered visual trickery), the sinister subterranean Institute and a realist mid-century Glasgow. Each realm is fully-realised with many deft - and sometimes breathtaking - theatrical illusions. Lighting by Nigel Edwards and video sequences by Simon Wainwright add to a spectacle that is visually and aurally ravishing. Music is by Nick Powell with contributions from a starry cohort of indie musicians (all, needless to say, unknown to me).

Sandy Grierson plays the title role of Lanark (aka Duncan Thaw) - a marvellous, fully rounded characterisation - and he works with a strong cast of well-known Scottish actors. There's some terrific ensemble acting, especially in the second part (which is Act 1) when they speak as an oracular chorus introducing elements of Lanark's childhood and adolescence.

I attended the final preview performance last night (it opens officially tonight) and was very impressed. The overall design is deliberately pre-digital, as it were - there's a strong 1970s look and feel to the soundtrack, and to the low-tech video projections, and to the costumes. Gray's drawings are cleverly incorporated, some of them animated at the opening of each act (though appearing too briefly to be fully appreciated). An elaborately engineered scaffolding set is trundled around by hard-working stage hands (more engaging low-techery), and there's an adroit Pirandellian moment in the last act that went down well with an enthralled audience. A standing ovation at the first curtain call - whoops and cheers. This was all clearly very special.

A quibble. Gray took enormous risks with the form and content of his novel but at times this stage version seems less confident, the script less sure of its audience. There seems to be an imposed upbeat ending that I don't recall in the original (in which Lanark's lover Rima says "I always loved you" to the dying hero). She doesn't, and didn't, and that's part of the point. Art offers some consolation to Lanark/Thaw in the novel, but love is more problematic. It's something he can never fully give or receive. That is his tragedy.

Gray is 80 this year, ten years older than the venerable Glasgow Citizens' Theatre. He was hospitalised in June following a serious fall at his home and was unfortunately not well enough to attend the opening night. The production comes with the author's blessing and should be seen.