Grief Is The Thing With Feathers 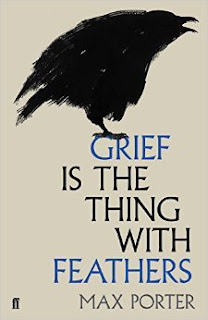 An anonymous widower ('Dad' throughout) and his young twin sons together mourn the death of his wife and their mother. Dad is a Ted Hughes scholar, working on a book about the poet for a dodgy-sounding Mancunian publisher. A crow arrives, taking up residence in their home and their lives. It's no ordinary crow - it's Ted Hughes' Crow.

On this premise the author builds a mesmerising polyphonic text (it could be a radio play without much in the way of alteration), a dazzling and richly rewarding debut that fits no existing category. It's hugely original, wayward and heartfelt - a terrific first book. It's bound to annoy Hughes purists and Plath devotees, and that's a welcome bonus. I don't want to give too much away so will - with apologies to the author - use this blog to bang on about a favourite subject.


Writing in Modern First Editions: Their Value to Collectors (1984), Joseph Connolly  (who would later become a Faber author) lamented the steep decline in the appearance of Faber & Faber books over the previous two decades. To make his case (and it seems to me an irrefutable one) he compared consecutive volumes in Lawrence Durrell's five-novel sequence known as the Avignon Quintet:

At the time Connolly was writing - thirty years ago now - Faber designers seemed to lack vision, confidence and innovation, as any Google image search of Berthold Wolpe's magnificent dust wrappers will confirm. His wrappers are timelessly modern, reassuringly confident and sexy in the way (say) Bernard Herrmann's credit sequences for Hitchcock movies are. They are unquestionably among the best dust-jackets ever designed - and the books they embellish are pretty good also.

The last Faber book that looked that like a proper Faber book - to me, at any rate - was  the volume of Jarvis Cocker's Mother, Brother, Lover (2011). At the author's insistence the main colour of the dust-wrapper had to correspond with a particular brand of Bourneville chocolate. You'll note the use of something close to Wolpe's Albertus typeface which, by the way, is used for street signs in the City of London, and  can also be seen in colossal upper case decorating the lintel (if that's what you call it) of Centre Point, the 33-story office tower designed by George Marsh of Richard Seifert and Partners and built between 1961 and 1966. If it suddenly  toppled in a north-easterly direction the rubble would just about reach the doorway of the Faber offices in Great Russell Street.

I'm a great admirer of Jarvis Cocker, as it happens, but it rankles that he gets this kind of treatment while the rest of Faber's magnificent poetry backlist doesn't appear in a similar format (stable, durable, dignified, timeless). Did Cocker (famously a graduate of St Martin's College) insist on this treatment? Do other writers not have his savvy, his clout? The book contains his selected lyrics, which are accorded the same respect as Crow and Wodwo. Cocker isn't much of a poet, but then Ted Hughes couldn't have delivered a blistering performance of Common People to a huge crowd at Glastonbury. Watch that here and marvel.

I have many Faber books from the 1930s which are still fresh and bright and have a pleasant smell, whereas paperbacks (not only from Faber) published ten years ago fall apart in my hands (so-called 'perfect' binding), and the nasty cheap paper is brown and crackly. Bad value, I'd say.

Grief Is The Thing With Feathers is one of the most beautiful Faber editions I've ever seen. A return to form? Faber's in-house designers have revived the look and feel of the company's books in their heyday: stately Wolpe lettering, a memorable illustration by the aptly-named Eleanor Crow, matt wrappers. And it's proof that you really can tell a book by its cover - this is a  covetably lovely first edition of a sensationally original debut.