The N-word of the 'Narcissus'

Thinking about the Narcissus legend prompts a reflection on a fine book by a great writer with, alas, a problematic title. 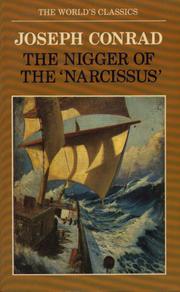 The Nigger of the 'Narcissus': A Tale of the Sea (1897) is a novella by Joseph Conrad. It concerns James Wait, a black sailor from the West Indies who contracts tuberculosis during a sea voyage, and the reactions of the crew, who at one point risk their lives to rescue him from his cabin during a fierce storm. Their humane and selfless courage is contrasted with the ship's inflexible captain and an old salt named Singleton, who attend only to their duties and have no interest in the fate of the sick man. The 'Narcissus', like Melville's 'Pequod', is an allegorical vessel. What interests the author is the value of the crew's self-sacrifice and the humanity that binds us all. It is not, of course, a racist novel.

The book was originally published in the United States as The Children of the Sea: A Tale of the Forecastle, the American publisher, Dodd, Mead and Company insisting  that no one would buy or read a book with the word 'nigger' in its title. This was not because the word was deemed offensive but because they felt that any book ostensibly about a black man would be unlikely to sell. 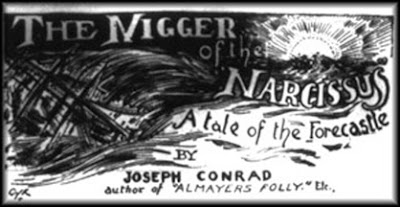 In 2009 WordBridge Publishing issued a new edition as The N-Word of the Narcissus, claiming optimistically that this would make the book 'more accessible'. Why didn't they simply use the original American title?

It's a great shame that many readers (and, one assumes, publishers) are put off this profoundly humanitarian story by its title. Conrad's suppressed Preface includes the following passage, in which he outlines a writer's desire to appeal to 'our sense of pity, and beauty, and pain; to the latent feeling of fellowship with all creation--and to the subtle but invincible conviction of solidarity that knits together the loneliness of innumerable hearts, to the solidarity in dreams, in joy, in sorrow, in aspirations, in illusions, in hope,  in fear, which binds men to each other, which binds together all humanity--the dead to the living and the living to the unborn.'

As far as the N-word is concerned (and should it always be capitalised, or is that adding injury to insult?) there's a low-voltage debate surrounding its non-appearance in the forthcoming remake of The Dambusters, a film based on Paul Brickhill's account of Operation Chastise, the RAF's wartime attack on the dams of the Ruhr Valley, using the ingenious bouncing bomb invented (as every schoolboy used to know) by Barnes-Wallis. In the original 1955 film (and in real life) Wing Commander Guy Gibson's black labrador was called Nigger, and the dog's name was part of the radio code message confirming that the strategically critical target of the Möhne dam had been breached. Stephen Fry, who has written the screenplay, re-names the dog 'Digger', saying by way of explanation 'no question in America that you could ever have a dog called the N-word". Fair enough, but this prompts and deserves a reflective 'Hmmm'.

Hmmm. It seems that in the States the only living creatures who can legitimately be addressed thus are human beings, and more particularly African Americans, at least in certain contexts such as stand-up comedy and Quentin Tarantino movies (see below). Fry is not being unreasonable, although I'm unsure why he singles out America, as if the word as applied to a dog would be acceptable elsewhere. In any case he might have chosen a name less phonetically similar to the offending word. Fido, perhaps, or Muffin. Perhaps he and the film-makers are straining at gnats and swallowing camels here and missing the point that there are other N-words every bit as offensive as the one we tip-toe so carefully around - Nazi and Nazism for instance. The courageous young airmen of the RAF were fighting an enemy prosecuting more vigorous and vicious forms of racism than we can easily imagine today. The Nazis had it in for everyone, of course. Perhaps another film-maker would explore this, rather than revise a trivial if historically undeniable detail which (one optimistically assumes) is unlikely to give offence to anyone with a sense of proportion.  Of course a sense of proportion isn't a common currency, but the fact remains that the word is unacceptable now (and that's not worth debating) but it wasn't then, or at least not in this canine context. One didn't give labrador dogs deliberately offensive names. Many of these young airmen were also smokers, for heaven's sake. What are we to make of that? And come to that we no longer routinely bomb the shit out of German factories, or tackle U-boats in the North Atlantic. But you get my point.

Conrad's title uses the word inoffensively, as he takes pains to explain in his introduction. The airmen of Operation Chastise used what was in their day and from their perspective a less offensive word than it is today, and used it inoffensively. In Django Unchained, the latest film by Quentin Tarantino, the now-offensive word is used very offensively over a hundred times. Context is what counts, and common sense (which, as Mark Twain pointed out, is what we use after we've exhausted the alternatives).

These alternatives are being noisily explored by hacks at the Daily Mail. The rag recently reported the decision by BBC radio producers to cut the line 'one less white nigger' from Elvis Costello's Oliver's Army, a blistering anti-war song from 1979, and one that has been transmitted uncut countless times over the past thirty years. Amusingly the Mail's blustering self-righteous denunciaion of the politically-correct lefties at the Beeb censoring free speech did not extend to them printing 'the N-word' in full in their report.

Let's agree that, like tuberculosis, it's part of our history and has no place in modern life. But to deny that tuberculosis was a scourge in the past by eliminating its appearance in contemporary medical documents is asking for trouble.